Is cat-calling and wolf-whistling an unnecessary, aggressive form of sexual harassment in a public place that has no place in modern society?

Or is it a harmless form of flirting with a complete stranger? 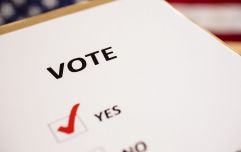 END_OF_DOCUMENT_TOKEN_TO_BE_REPLACED

That is the question that was asked on Monday night's Claire Byrne Live on RTÉ One.

The poll, which was carried out by Amarách Research, asked over 1,000 Irish adults, aged 18 and over, the following question, and this is how they answered:

Is wolf-whistling a form of sexual harassment which should be outlawed??

There is a new legislation in the works in France which will see men receive on the spot fines if they are caught catcalling or harassing women in the street.

The Telegraph have reported that French President Emmanuel Macron has shown his support for the new law, announcing earlier in October that he will send new teams of community police to enforce the law.

popular
Sinn Féin affordable housing bill passed as Government forgets to vote on its own counter-motion
TV reporter rescues stolen dog live on air while reporting on its theft
10 bad movies that actually got good reviews when they were released
The 50 most iconic songs of all time* have been revealed
Negative review of Shrek on its 20th anniversary sends Internet into meltdown
Aer Lingus to permanently close its base at Shannon airport
Irish mother soothes crying baby to sleep by playing Mark McCabe's Maniac 2000
You may also like
2 years ago
Ryanair respond to being voted "worst airline" for the sixth year in a row
2 years ago
Ireland's favourite Christmas movie of all time has been revealed
2 years ago
GAA has overtaken soccer as Ireland's most popular sport
2 years ago
New study reveals surprisingly high number of people are "taking a break" from Facebook
2 years ago
New poll reveals a shockingly high number of Irish workers have had their lunches stolen in the office
2 years ago
97% of people don't wash their hands properly, according to new government study
Next Page