Taoiseach Leo Varadkar and Fianna Fáil leader Micheál Martin met on Saturday afternoon, but no conclusion has been agreed to.

Following the meeting, a spokesman for the Taoiseach told The Irish Times that “There was a good exchange of views at the meeting. Contact continues this weekend.”

On Friday, Leo Varadkar said that he will not be seeking the resignation of Tánaiste Frances Fitzgerald. 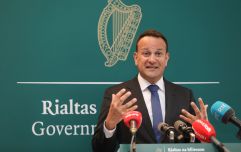 "This is a pandemic of the unvaccinated," says Leo Varadkar

END_OF_DOCUMENT_TOKEN_TO_BE_REPLACED

He appeared on RTÉ's Six One new this evening and said that he would not be pressured over the weekend to dissolve the Dáil but if there was to be an election, he said it would be better that it would be done before Christmas.

Varadkar said that there's still an opportunity to avoid an election and that they would discuss compromises over the coming days.

But he warned that if there is not agreement between Fine Gael and Fianna Fáil before Tuesday, there would be an election and it would not be postponed until January.

The Sunday Business Post revealed the outcome of their latest poll, which shows Fine Gael losing supporters in light of the potentially impending general election, while Fianna Fáil and Sinn Féin gain numbers.

popular
Amazon Prime Video has quietly added 10 big new movies to its library
The new restrictions likely to be introduced as NPHET meets with Govt
Yet another new Wetherspoons is set to open in Dublin city centre
8 great new additions to Amazon Prime Video in December
House of Gucci has the best sex scene from a big Hollywood movie in years
Clint Eastwood's final western is among the movies on TV tonight
The 50 most iconic songs of all time* have been revealed
You may also like
1 week ago
Austria reimposes full lockdown for all citizens, including vaccinated
1 week ago
Leo Varadkar says unvaccinated people are "causing a lot of the trouble"
1 week ago
Free antigen tests to be made available for Government staff
2 weeks ago
US representatives issue warning to the UK over triggering Article 16
3 weeks ago
Covid cases to hit 4,000 "today or tomorrow" – Leo Varadkar
3 weeks ago
Just Eat to create 160 new jobs in Ireland
Next Page