Researchers at Oregon State University have concluded that xanthohumol, an elusive substance found in wheat and hops, has been proven to lower cholesterol levels in rats and mice. 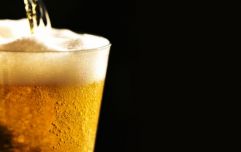 New study suggests that people under 40 should not drink alcohol

END_OF_DOCUMENT_TOKEN_TO_BE_REPLACED

While it will likely take significant time before human trials can get underway, the results look promising.

Forty-eight male mice were fed a high-fat diet and split into two groups: One group was administered (60 milligrams a day for 12 weeks) while the other went xanthohumol-free.

Cristobal Miranda, the lead author of the study and Fred Stevens, a professor in the OSU College of Pharmacy, told Broadly that unfortunately a 10-stone human would need to drink 3,500 pints of beer in the space of 24 hours...

However, the majority of the mice cut harmful cholesterol levels by 80 per cent and insulin levels by 42 per cent.

So maybe just have one pint... and see what happens.

For more information, check out drinkaware.ie.

popular
Welder awarded €15,000 for unfair dismissal despite admitting to drinking alcohol before work
Netflix has just quietly added 30 big movies to its library
10 years ago today, the scariest movie ever made (according to science) was released
One woman dead and four injured after separate crashes in Clare and Mayo
Amazon Prime Video has just added 37 big movies to its library
Netflix reveals full line-up of new shows and movies arriving in October
Man in his 40s dies following assault at funeral in Kerry
You may also like
4 months ago
Beer production in Ireland fell by nearly 50% in 2021 as alcohol consumption declines dramatically
7 months ago
QUIZ: Name the celebrity owners of these world famous alcohol brands
9 months ago
This is how much alcohol will cost under the new minimum unit pricing system
10 months ago
Irish people among the heaviest drinkers in the world, new survey finds
1 year ago
Alcohol consumption in Ireland lowest in 30 years, according to a new study
1 year ago
Irish brewing company teams up with Club Orange to create a Rock Shandy Pale Ale
Next Page