The Aran Islands, as seen by an outsider...

The Aran Islands are "a place lost in time" according to Hollywood actor and author Andrew McCarthy, who wrote about them in the New York Times.

The article waxed lyrical about the islands in a travel feature following a number of visits by McCarthy over the course of several months.

"The three remote Aran Islands of Inishmore, Inishmaan and Inisheer hide in plain sight in the mouth of Galway Bay," McCarthy wrote.

"They are still predominantly Irish-speaking, insular and, as even in Synge’s era, considered a place lost in time."

McCarthy was following the footsteps of J.M Synge, author of 'Playboy of the Western World', who spent most of the summers of his later years on the Aran Islands.

"Part of the considerable allure of Aran lies in what it lacks," McCarthy wrote. "There are no movie theaters and few cars; electricity only arrived in the 1970s."

He repeated a line which was told to him by a local, "There’s no facilities here; you rely on the people." 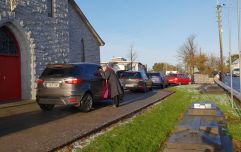 END_OF_DOCUMENT_TOKEN_TO_BE_REPLACED

However, despite all this, McCarthy was forced to acknowledge the tourist trade which is on the islands.

"There were horse and trap rides, coffee carts and stands selling local fudge. But just beyond the flurry of town, Inisheer, with its 250 residents, is perhaps the most physically picturesque of the three Aran Islands, and its three square miles make it easy to navigate on bicycle."

You can read the article in full here.

McCarthy is best known for his roles in 1980s movies Pretty in Pink and St Elmo’s Fire as well as Weekend at Bernie's, but has become more known as a travel writer in recent years, featuring on National Geographic with a story about Kerry three years ago.


popular
Interactive infographic shows real-time spread of coronavirus outbreak
Here's Week 21 of JOE's 19 in 90 quickfire quiz
Emirates is recruiting new cabin crew members in Galway for tax-free jobs
Galway parish reports record high attendance at Ash Wednesday drive-thru
QUIZ: The devilishly tricky grammar quiz that will drive you around the bend
Rallies prove that Sinn Féin are playing the game better than anyone else right now
Singer Duffy reveals she was drugged and raped while being held captive
You may also like
10 hours ago
Ireland vs Italy Six Nations games will not go ahead due to coronavirus concerns
10 hours ago
Gardaí investigating alleged sexual assault on woman at a house in Cork
14 hours ago
Man arrested for spate of burglaries in Cork and Waterford
14 hours ago
WHO expert says world is "not ready" to contain coronavirus
15 hours ago
Rain, hail, sleet, snow and thunder in store for Ireland this weekend
1 day ago
Met Éireann issues snow/ice warning for three counties
Next Page