The NYPD have changed the way they handle marijuana possession.

Fed up spending too much time arresting people for small marijuana possession, Police Commissioner Bill Bratton and New York Mayor De Blasio (pic below) has announced that the NYPD will no longer arrest people for possession of 25g or less of cannabis. 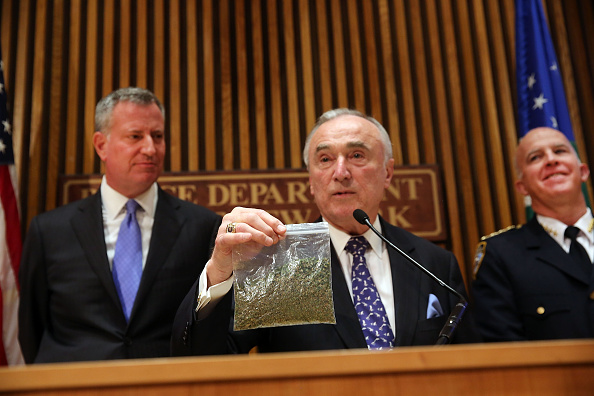 Human remains found in suitcases are the bodies of two children

END_OF_DOCUMENT_TOKEN_TO_BE_REPLACED

They feel that the energy of the force would be better served by targeting more serious crime. Tens of thousands of people in New York get arrested each year for low level possession of marijuana and now, instead of being sent to jail, they will be issued with a summons and get fined $100.

It should be noted though that if you are caught burning or smoking marijuana you will be arrested. The law change only applies to those in possession but not using.

With Oregon, Colorado and Alaska legalising marijuana, it's another step closer to allowing the legalisation of the drug in other states.

popular
People want "offensive" Crown Paints advert banned after attracting hundreds of complaints
Disney+ has just added 10 big movies to its library
Netflix has just added 23 very big movies to its library
Human remains found in suitcases are the bodies of two children
QUIZ: Can you identify the famous song from the opening line?
The 50 most iconic songs of all time* have been revealed
A terrific '90s crime drama is among the movies on TV tonight
You may also like
5 days ago
Salman Rushdie likely to lose an eye following stabbing in New York
6 days ago
Author Salman Rushdie reportedly stabbed on stage during event in New York
6 days ago
WATCH: Flight makes scary 'lowest ever landing' at Greek airport, narrowly avoiding plane spotters
6 days ago
Actress Anne Heche "not expected" to survive coma following car crash
1 week ago
Ryanair expects "zero disruptions" from strikes by Spanish cabin crew unions
1 week ago
Archie Battersbee dies aged 12 as life support is withdrawn
Next Page