NPHET: Moderate increase in close contacts could result in 578,000 cases of Covid-19 in the next six months

NPHET projected that increased social contact could lead to a peak of 9,500 cases a day in Ireland in the coming months.

The National Public Health Emergency Team (NPHET) projected that an increase in close social contact could lead to a peak of 9,500 cases of Covid-19 per day in Ireland and as many as 578,000 cases in total in the next six months.

In a letter sent to Minister for Health Stephen Donnelly on Monday (29 March), ahead of a government announcement on the easing of restrictions yesterday, Acting Chief Medical Officer Dr. Ronan Glynn outlined a “moderate scenario” in which such a high number of cases could arise.

END_OF_DOCUMENT_TOKEN_TO_BE_REPLACED

The letter also details a base conservative scenario, with current or marginal increases in close social contact from 5 April 2021, that would result in approximately 80,000 cases by the end of September, with a peak of around 920 per day.

A second “low” scenario projects 199,000 cases over the same time period, while the “moderate” scenario is associated with seven times the level of infection outlined in the base scenario. 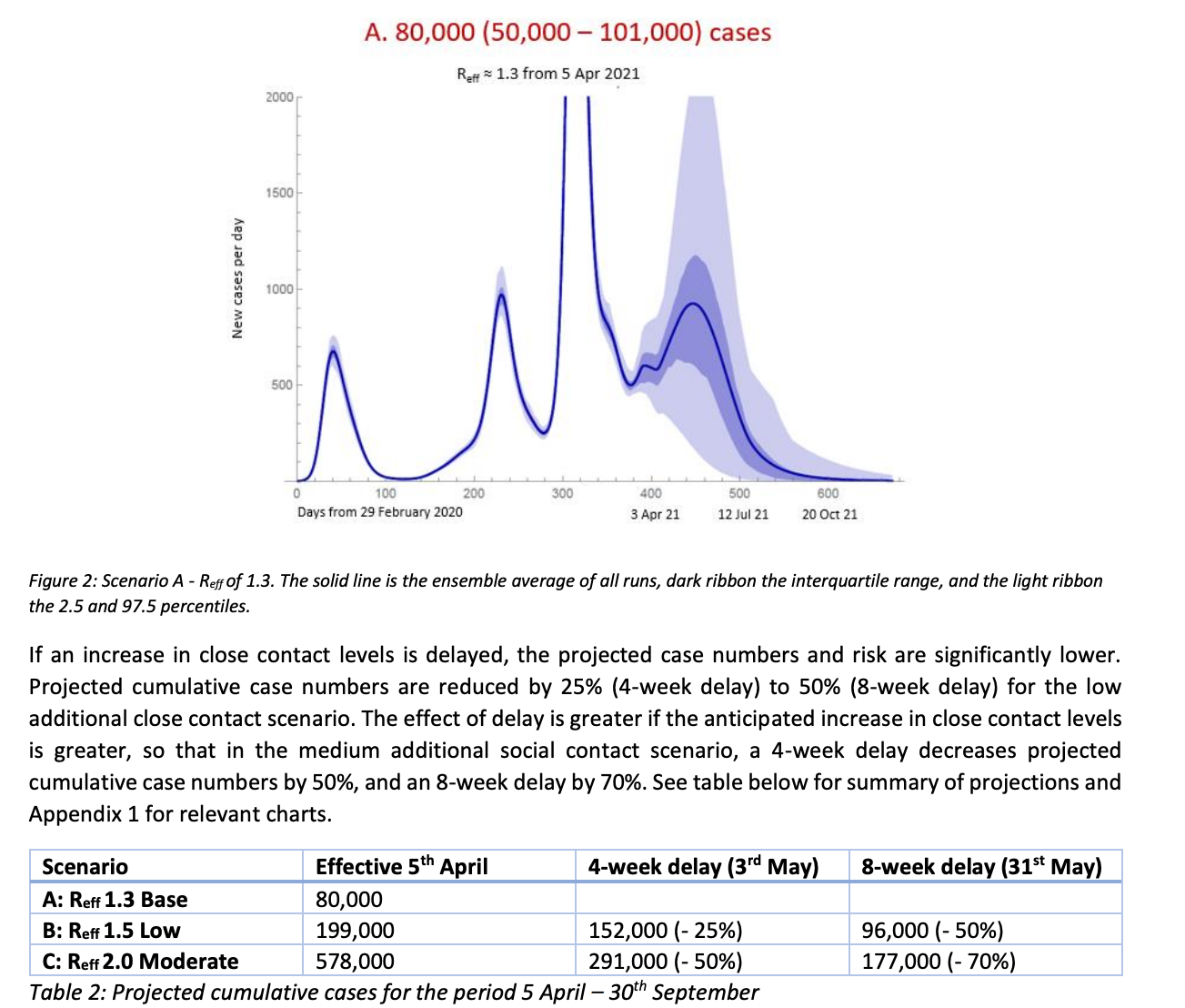 Across all three scenarios, the letter details, cases initially increase until the vaccination programme in Ireland starts to suppress transmission from the end of May.

END_OF_DOCUMENT_TOKEN_TO_BE_REPLACED

You can see the projections and read the letter from Dr. Ronan Glynn to Stephen Donnelly in full here.

Speaking on Wednesday, after a further 411 cases of Covid-19 and six deaths were announced, Glynn said: "There is a critical window over the next eight weeks where any significant increase in close contact is likely to lead to a significant fourth wave of infection in the range of that experienced in January 2021.

"We can and should be optimistic for an enjoyable summer ahead but, in the meantime, we have to continue to work together to prevent a further wave of infection as we accelerate vaccination across society and maintain our health services."

Speaking in the Dáil on Wednesday, Taoiseach Micheál Martin said that 70% of the population should be fully inoculated against Covid-19 by the end of July.

Martin also confirmed that a national portal allowing the public to register for an appointment for a Covid-19 vaccine is due to go live before the end of next month.

The Big Reviewski || JOE · The Big Reviewski with Dune, a mini-Hangover reunion & the best of Timothée Chalamet
popular
Report: Crew left Alec Baldwin film set in protest before fatal shooting
The JOE Friday Pub Quiz: Week 266
PICS: The man with the biggest penis in the world has one unbelievable problem with it
Dublin museum voted Europe’s leading visitor experience... again
The JOE Music Quiz: Week 78
The 50 most iconic songs of all time* have been revealed
WATCH: Massive queues in Dublin as nightclubs finally reopen
You may also like
19 hours ago
New appeal over Philip Cairns case on 35th anniversary of his disappearance
21 hours ago
WATCH: Massive queues in Dublin as nightclubs finally reopen
1 day ago
Hunger strike ends as Nadim Hussain assured he won't be deported
1 day ago
Vintners hit out at "hapless" guidelines following "shambolic" week
1 day ago
9.2 million illegal cigarettes seized at Dublin Port by detector dog
1 day ago
Nightclubs are now ticket-only events, according to new measures
Next Page