NPHET doctor warns that "if we release restrictions too quickly, this will kick off again"

"People have done so well and we don't want to undo all of that good work for the sake of a couple of weeks."

Speaking on Virgin Media's Tonight Show on Monday, the virology expert said it's possible that "96% of the population are still susceptible to the virus". 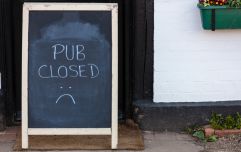 END_OF_DOCUMENT_TOKEN_TO_BE_REPLACED

Asked by host Matt Cooper what lessons Ireland had learned from countries such as New Zealand, where spread of the virus is currently "eliminated", de Gascún said: "If we release the restrictions too quickly, this will kick off again."

"People have done so well and we don't want to undo all of that good work for the sake of a couple of weeks."

Additionally, Dr. de Gascún noted that we are "12-18 months away from a vaccine" and that "we don't have any anti-viral therapy".

Gardaí relaunched Operation Fanacht at 7am this morning (28 April) in anticipation of movement around the coming May Bank Holiday.

The government is set to update the public as to the status to containment measures on 5 May.

Yesterday, a spokesperson for the Department of the Taoiseach acknowledged anecdotal evidence that people are becoming "very fed up" with the containment measures, which include the closure of all non-essential businesses, and the a ban on travelling further than 2km from one's home for non-essential purposes.

As of 27 April, the Republic of Ireland has suffered 1,102 official deaths as a result of Covid-19, and an official tally of 19,648 confirmed cases - over a quarter of which are healthcare workers.

popular
Eir CEO says opening a call centre in Sligo was a "mistake" as staff weren't sufficiently skilled
QUIZ: How will you fare in our ‘Not as it seems’ quiz?
Principal of Carlow school denies claims female students were asked not to wear tight leggings to school
Here are the best movies on TV this evening
QUIZ: How well do you remember the final season of Game of Thrones?
Two homeless men found dead in Dublin
Met Éireann issues fog warning for 12 counties
You may also like
3 days ago
One new Covid-19 related death and 318 new cases confirmed in Ireland
4 days ago
Four more deaths and 344 new cases of Covid-19 confirmed in Ireland
4 days ago
WATCH: David McCullagh and Eileen Dunne apologise on air for attendance at RTÉ function
4 days ago
Micheál Martin says Covid-19 vaccine could be approved in Ireland before Christmas
5 days ago
Urgent review sought of “grave breaches” of Covid-19 guidelines at RTÉ retirement function
5 days ago
High-profile RTÉ staff apologise after attending "impromptu" gathering in Montrose during Level 5 restrictions
Next Page