Over one million people evacuated as Hurricane Florence approaches US

The hurricane is the most powerful storm to take aim at the US mainland this year.

Over one million people have been ordered to leave their homes in Virginia and South Carolina as a dangerous hurricane nears the US coast.

Hurricane Florence is expected to start making an impact from Thursday, bringing with it devastating winds and storm surges in the states.

END_OF_DOCUMENT_TOKEN_TO_BE_REPLACED

Florence is currently rated as a category four storm, the second highest rating by the US national weather service, who predict it could be the worst hurricane in modern history to hit the southeastern US.

Currently, the storm has winds of over 209km and is expected to gain in strength as it approaches land.

"The hurricane is particularly big, particularly strong and there’s nothing stopping it," South Carolina Governor Henry McMaster said at a news conference on Monday.

"And when it hits the Gulf Stream in warmer water, it’s going to [intensify] even more."

#Florence is now a powerful Category 4 hurricane with maximum sustained winds of 130 mph. #GOESEast captured this close-up of the storm's eye as it continues tracking toward the southeastern U.S. Latest: https://t.co/vziaU0pOhE pic.twitter.com/SvHPKYGZsC

He ordered the evacuation of coastal areas to start at noon on Tuesday as it approaches, adding that the storm surge could reach as high as 10ft and cause severe flooding. 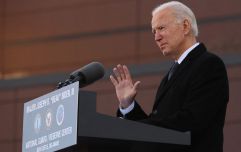 END_OF_DOCUMENT_TOKEN_TO_BE_REPLACED

"We know this evacuation order I’m issuing is going to be inconvenient," McMaster said.

"But we’re willing to suffer some inconvenience.”

The United States was hit with a series of high-powered storms last year, including Hurricane Harvey, which killed about 68 people and caused an estimated $1.25 billion in damage to the city of Houston.

The last category four storm to hit the region was Hurricane Raymond in 1989. During this, one fatality was recorded and damage throughout Arizona amounted to $1.5 million.

Advertisement
House of Rugby Ireland · Quinn Roux on finding a home in Ireland and Mike McCarthy brings the absolute HEAT!
popular
Joe Exotic fails to receive pardon from US president Donald Trump
Government abandons plans to reopen schools for children with special educational needs
Joe Exotic has limo waiting as he expects presidential pardon from Donald Trump
Joe Biden quotes James Joyce in farewell speech in Delaware
Irish punters could turn €0.98 into hundreds of millions* with a bet on the Super Jackpot
5 upcoming movies about the end of the world
QUIZ: Can you name all the teams in the NBA from their locations?
You may also like
5 days ago
Armie Hammer drops out of Jennifer Lopez film amid social media controversy
6 days ago
Cori Bush denounces Trump as "white supremacist" to chorus of boos
6 days ago
US executes first woman on federal death row in nearly 70 years
1 week ago
Amazon to remove Parler from its platforms, following Google and Apple suspensions
1 week ago
Trump supporter pictured in horns and furs charged for role in Capitol riot
1 week ago
Man who was pictured stealing Nancy Pelosi’s podium has been arrested in Florida
Next Page