His former team-mate Stuart Olding is reported to follow.

Paddy Jackson is to join the English Premiership team Sale Sharks on what is being called a “cut-price” deal.

According to reports in The Telegraph, Jackson has agreed to a deal with the team and is due to sign shortly, with Stuart Olding expecting to follow. 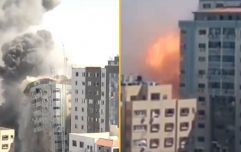 END_OF_DOCUMENT_TOKEN_TO_BE_REPLACED

The former Ulster teammates both had their contracts with the IRFU revoked last month after a review into their conduct was concluded.

The two men were found unanimously not guilty of rape in the Belfast trial, and Jackson was also acquitted of sexual assault.

The two men had shared their hopes to return to professional rugby in the weeks after the verdict was announced, however an online petition called for the men to be subjected to a review with many calling on the IRFU to not reinstate them.

Both Jackson and Olding had been linked with possible moves to other teams in the UK and in France, however interest quickly died down.

Reports in The Telegraph claim that Jackson has signed a deal for €230,000 a year which is a €50,000 drop per annum from what he was earning with the IRFU.

Sale Sharks have yet to formally comment on the signing and it is expected an announcement would not be made until June or early July.

The Big Reviewski || JOE · TBR Spotlight: Loki - Episode Two - 'The Variant'
popular
The Queen appealing for volunteers to weed the garden of her Sandringham Estate
Man in his 60s killed following assault at home
400,000 people waiting on second AstraZeneca not permitted to travel abroad under "vaccine bonus"
QUIZ: Can you get full marks in this potentially very frustrating general knowledge quiz?
Gardaí have said people can't drink alcohol in newly set up outdoor seating in front of bars
Aer Lingus introduce new fee to bring carry-on bags onboard flights
The JOE Movie Quiz: Week 107
You may also like
2 months ago
Police handling of Sarah Everard vigil appropriate, says watchdog
2 months ago
Hairdressers unlikely to open until the middle of summer
2 months ago
Joe Biden allocates $86 million to rehouse migrant families in hotels
3 months ago
Man aged 50 arrested over 2001 death in Michael Barrymore's pool
3 months ago
GMB’s Laura Tobin warns asteroid will narrowly miss Earth today
3 months ago
Alex Beresford finally responds to Piers Morgan after their feud
Next Page