It’s the first time the treatment has been available in Ireland.

A patient in St James' Hospital has received a groundbreaking treatment for lymphoma for the first time in Ireland on Monday (13 December).

The patient received cell therapy treatment, marking the first time that Chimeric Antigen Receptor-T (CAR-T) cell therapy has been provided in the state.

END_OF_DOCUMENT_TOKEN_TO_BE_REPLACED

The treatment was previously only available overseas, such as in the UK.

A patient's T cells are taken and brought to a lab to re-engineer them to target cancer cells. These cells are then reinfused with the body.

END_OF_DOCUMENT_TOKEN_TO_BE_REPLACED

It's expected that use of CAR-T cell therapies will grow exponentially and will include other diseases in coming years.

“I welcome the commencement of a national CAR-T therapy service for cancer patients at St James's Hospital," said Minister for Health Stephen Donnelly.

"This therapy had previously only been available overseas and it will make a huge difference to people to be able to access it in Ireland.

"I hope that CAR-T therapy will greatly improve treatment outcomes for many over the coming years. 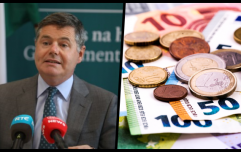 END_OF_DOCUMENT_TOKEN_TO_BE_REPLACED

"I provided €57 million this year for the development of cancer services, improvements in cancer screening and new cancer drugs.

"It is great to see the direct benefits that this funding is bringing to patients through new initiatives such as CAR-T therapy,” he concluded.

The treatment has around a 40% success rate, but without it, most of these patients will face terminal illness.

The patient, who wishes to remain anonymous, was excited to try this revolutionary treatment.

“I’m thrilled to be able to access this treatment in Ireland," they said.

"I feel like I was on the edge of a cliff about to fall off and I've been thrown a rope and I'm going to grab it with both hands.

"It has not been an easy road for me and my family, but now I feel like I have a fighting chance.”

CAR-T therapy is available in more than 15 EU countries, and has been publicly available in England through the NHS since 2018.