The advice comes as NPHET is to examine new data on Covid-19 on Thursday.

Deputy Chief Medical Officer (CMO) Dr Ronan Glynn has said those planning to visit older family over Christmas should "rein in" their levels of socialisation in the weeks ahead.

The Deputy CMO made the comments on Today with Claire Byrne, following Tánaiste Leo Varadkar stating that the Government has seen early signs the current Covid wave is "starting to level off". 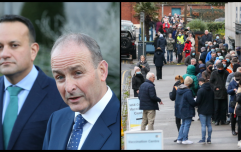 END_OF_DOCUMENT_TOKEN_TO_BE_REPLACED

Asked about this, Glynn said that while the positivity rate of the virus in the community has plateaued in recent days, it has done so at the "extremely high level" of about 20%.

He said that NPHET will be examining new data regarding the Covid situation in Ireland on Thursday.

"So, we will be looking at the data again tomorrow, probably back again next week - looking at updated modelling.

"It's only at that point really that we'll be able to say whether we're closer to the optimistic or pessimistic scenario.

"We'll just have to see where we are in a week, 10 days' time and if necessary, provide further advice at that point".

Glynn also stated that NPHET does not want to be in a position where it has to recommend further restrictions.

END_OF_DOCUMENT_TOKEN_TO_BE_REPLACED

However, he added that if the country sees further disimprovements in the trajectory of the virus or if there were other Covid concerns, NPHET would have to make recommendations to address those concerns.

On the topic of Christmas, Glynn also issued a plea to the public, particularly young people.

"Our younger population who are not yet due a booster and who have been vaccinated are very well protected," he explained

"But we're coming into a time of year now, if you recall last year - our key concern at this time last year [was] that in the first two weeks of December, we would have huge levels of inter-household mixing through socialisation.

"So, lots and lots of younger people come together in bars and pubs and other settings around this country in the first two or three weeks of December.

END_OF_DOCUMENT_TOKEN_TO_BE_REPLACED

"What then happens from the 20 December onwards is they all go home to their family homes and we get inter-generational mixing."

Glynn said that the combination of inter-household mixing followed by inter-generational mixing was a factor in last January's wave of the virus.

"And so our core message has to be that if you're going to be going home to your family... you need to rein in the socialisation in the weeks ahead."