The Tánaiste also asked employers to "have a heart" and not dock staff members' wages for leaving work to receive a vaccine.

Tánaiste Leo Varadkar has said a phased return to workplaces is expected to happen in September.

He made the comments on The Pat Kenny Show after being asked when those still working from home will get the green light to return to offices and other workplaces.

END_OF_DOCUMENT_TOKEN_TO_BE_REPLACED

Varadkar replied: "I don't know yet. I had hoped that we'd be able to start that in August. That's now looking unlikely. So, we're now kind of thinking more in the space of September.

"But the big move in September of course will be 1.25 million school kids and college students going back and that'll be the big priority for September.

"But we would like to see a phased return to the workplace, to offices as well, at that point... Certainly, all adults who want to be vaccinated should be vaccinated by then.

"We expect to see a phased return to the workplace kind of happening September, over the October period."

However, he stated this could be impacted if there was to be a new variant of Covid-19.

"There is of course the big unknowable - potentially another new variant that is able to evade the vaccines. That's the big fear at the moment," he added.

"But so far, that hasn't been the case."

END_OF_DOCUMENT_TOKEN_TO_BE_REPLACED

Varadkar was also quizzed about reports of employers docking wages of staff who have to leave work to attend a vaccine appointment, which he said was churlish and unfair.

"An appointment for a Covid vaccine, I suppose, is a little bit like a medical appointment. Most of the time, it should be possible to organise your working day or your shifts around that, particularly if you get plenty of notice," the Tánaiste said.

"But actually what's happening at the moment because the vaccine programme is going so well is people are registering for their vaccine and their getting an appointment for a day's time or two day's time or three day's time and your shifts might already be set out.

"So, what we're saying to employers is that in those circumstances, you know, you really should let your employee get their vaccine and not dock their wages for it.

"It's different if they had two weeks notice or a week's notice and you can adjust shift patterns for that but where they get an appointment very quickly... you really should facilitate them and not penalise them financially." 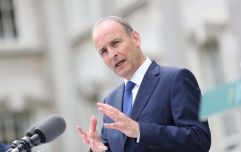 END_OF_DOCUMENT_TOKEN_TO_BE_REPLACED

Varadkar said that it is in employers' interest that staff are vaccinated and called on them to "have a heart".

Asked about employers who do not follow this request, the Tánaiste said "maybe a bit of name and shaming might help".

"I'd certainly like to see people let us know about companies or employers that are behaving in that way," Varadkar said.

The Big Reviewski || JOE · The Big Reviewski with Y: The Last Man, that Malignant ending & a secret streaming service
popular
The Big Reviewski JOE Movie Quiz: Week 120
The 50 most iconic songs of all time* have been revealed
All of the restrictions easing from tomorrow as Ireland continues to reopen
Daniel Craig says goodbye to James Bond in emotional farewell speech
PICS: The man with the biggest penis in the world has one unbelievable problem with it
The JOE Friday Pub Quiz: Week 261
QUIZ: Give your brain the pump it deserves with this general knowledge quiz
You may also like
14 hours ago
Gardaí arrest woman (18) on suspicion of serious assault of a man (30s) in Limerick
1 day ago
Garda hospitalised after motorcycle crash in Dublin
1 day ago
Gardaí launch investigation after man discovered with "serious injuries" in Limerick
1 day ago
Pop-up Covid-19 vaccination centres to open on college campuses this month
1 day ago
The five "best places to live" in Ireland have been revealed
2 days ago
Copper Face Jacks sets reopening date after being closed for 18 months
Next Page