Thousands have been trying to flee the country on flights out of Kabul.

A shocking new photo from the evacuation of Kabul shows how nearly 650 Afghans were crammed on one US Air Force plane out of the city.

The image shows hundreds of passengers crammed into the huge cargo jet. It is thought that approximately 640 passengers were aboard the C-17 Globemaster II jet, far more than the aircraft was allowed to carry.

The image was obtained by military news site Defense One, with a defence official telling the site: "The crew made the decision to go.

"Approximately 640 Afghan civilians disembarked the aircraft when it arrived at its destination."

"The Crew Made the Decision to Go:" Inside Reach 871, A US C-17 Packed With 640 Afghans Trying to Escape the Taliban | @TaraCopp and @MarcusReports https://t.co/lf3LajxzzX pic.twitter.com/6wg82LtfRc

Journalist Alex Macheras shared footage of people trying to board the plane on Twitter.

This footage from Kabul airport — Afghans desperately trying to board a C-17 airlifter from the Gulf. #Afghanistan pic.twitter.com/c8s5ZsB3cs

On Monday, there were chaotic scenes at Kabul's main airport as thousands tried to secure a way out of the city following the Taliban's takeover of the capital. 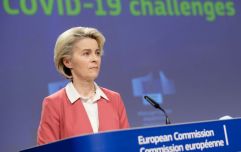 END_OF_DOCUMENT_TOKEN_TO_BE_REPLACED

This completed a rapid advance throughout the country from the extreme Islamist group.

At least seven people were killed at the airport, including two armed men who were shot by US troops. American forces have taken over control of the airport to aid the evacuation.

On Monday evening, US President Joe Biden admitted that the Taliban takeover unfolded "more quickly than we had anticipated," but defended his decision to end the US presence in Afghanistan, saying that he "stands squarely behind" the decision.

popular
One of Keanu Reeves' best movies has just been added to Netflix
"Clear as daylight" that unvaccinated people are a risk to themselves and others - Taoiseach
The JOE Movie Quiz: Week 131
QUIZ: Do you reckon you can get 15/15 in this General Knowledge Quiz
A terrific crime thriller is among the movies on TV tonight
QUIZ: Can you get full marks in this General Knowledge Quiz?
QUIZ: Name all the countries that contain 11 letters
You may also like
4 days ago
Several people injured in Germany after old aircraft bomb explodes
5 days ago
All confirmed Omicron cases in the EU so far asymptomatic or mild, says ECDC
5 days ago
Barbados cuts ties with UK and becomes a republic
6 days ago
Twitter CEO Jack Dorsey officially resigns from the company
1 week ago
Omicron variant symptoms are "mild" so far, says doctor who discovered it
1 week ago
UK pub-goers snowed in with Oasis tribute band due to Storm Arwen
Next Page