PIC: Conor McGregor managed to get a vote in the General Election

Certain people wouldn't trust a politician as far as they can throw them and we're confident in saying that Conor McGregor would be capable of flinging a few TD's to the deck if needs be. Why the UFC featherweight champion would be getting into a scrap at Dail Eireann is beyond us but it still makes for an interesting image!

If McGregor did run in the local elections then we're sure that he would get a few votes. I mean, The Notorious is one of the most popular people in Ireland - although like most politicians he has detractors also- but he's the king of giving interviews.

Could you imagine what the debates would be like with him or the the campaign slogans that he would use?

Even when he's not on the ballot, McGregor is still the number one vote for some. 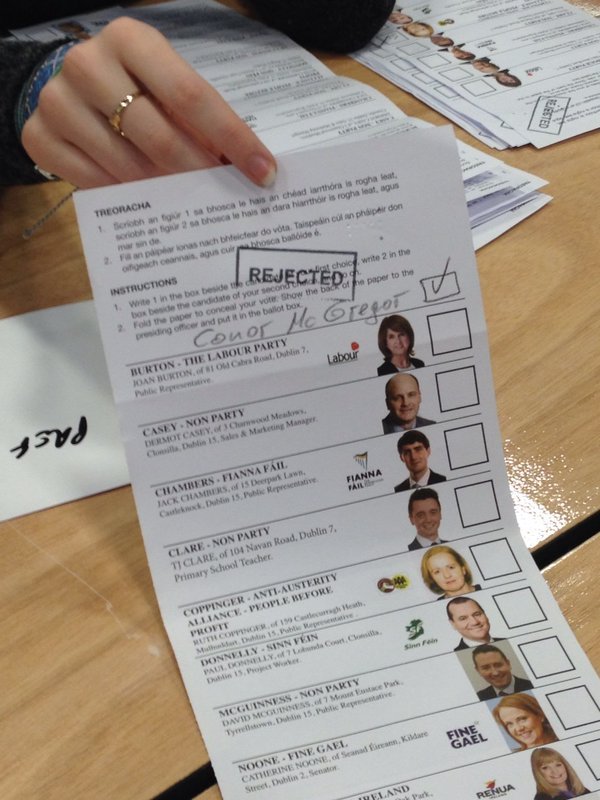 popular
Jeffrey Dahmer’s dad thinks he knows what’s to blame for son becoming a serial killer
Two new 24-hour bus services are coming to Dublin
QUIZ: Test your knowledge with this Ultimate Friends Character Quiz
House Of The Dragon is already better than Game Of Thrones
Power-ranking the House of the Dragon characters after THAT big fire
WATCH: HBO's The Last Of Us trailer is finally here and it is brilliant
People think they've figured out the ranking of the viewers on your Instagram Stories
You may also like
1 month ago
Conor McGregor to make film acting debut in Road House remake
1 year ago
WATCH: Conor McGregor and Machine Gun Kelly face off at MTV VMAs
1 year ago
Jake Paul calls out Conor McGregor in nasty video
2 years ago
Conor McGregor responds to Paschal Donohoe’s calls to encourage social distancing amongst Irish public
3 years ago
WATCH: New footage released of Conor McGregor allegedly smashing fan's phone in Miami
3 years ago
Timing of Conor McGregor announcement is no coincidence
Next Page