Pic: Irish Tinder user is very picky when it comes to finding a match...

We all look for one or two particular things when it comes to picking a partner, but 15 requirements seems like a bit much to be asking for on Tinder…

Telling your potential Tinder matches that they “must… have a hot sister I can use as a backup” probably isn’t the best way to introduce yourself on the social media site.

Having said that, it seems to be working for this lad, who goes by the name Lorcán, and if you read a little further down his list of 15 requirements you’ll see why he seems so picky… 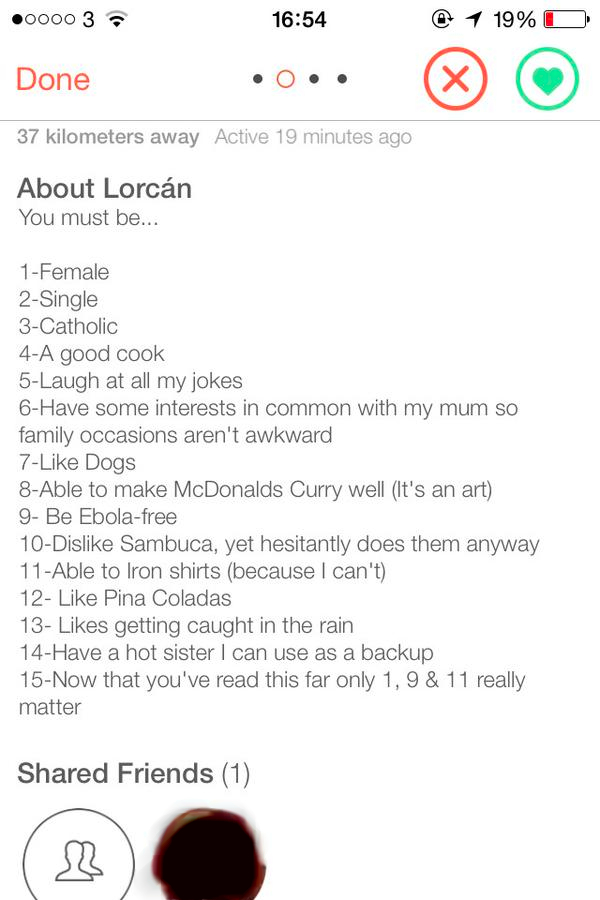 So it turns out that Lorcán isn’t exactly the Picky Peter that we thought he was at first and instead all he asks in his potential matches is that they are ebola-free females who are able to iron shirts.


popular
QUIZ: How many of these Derry Girls characters can you name?
Sinn Féin announce a series of public rallies to take place in five counties
Brendan Gleeson's upcoming performance as Donald Trump is 'scary' and 'too close for comfort'
How well do you remember these classic PlayStation 2 games?
QUIZ: Can you name the Sega Mega Drive game from the screenshot?
The JOE Friday Pub Quiz: Week 179
5 new Netflix additions to spend your weekend watching
You may also like
2 days ago
Police investigating attempted ATM robbery in Antrim
3 days ago
Gardaí launch investigation into four-lane motorway sulky race
3 days ago
A preferred route has been chosen for the new Cork to Limerick motorway
4 days ago
History to be required Junior Cycle subject from September
4 days ago
Two Irish citizens have tested positive for the coronavirus
4 days ago
Ryanair plane in Dublin disinfected after two people fall ill on flight
Next Page