PIC: Minister Simon Harris won’t like the edit that’s been made on his Wikipedia page

Not exactly something you want associated with the Minister for Health.

It’s been an eventful couple of weeks in Irish politics and particularly in the Fine Gael party, where speculation continues about the future of party leader and Taoiseach Enda Kenny.

Kenny’s future as party leader is uncertain at best and amongst the many contenders being talked about as his eventual successor is Minister for Health Simon Harris, still a relative cub in political terms at only 30 years of age.

END_OF_DOCUMENT_TOKEN_TO_BE_REPLACED

Harris has been talking up his credentials as leader in recent days and if he is to ascend the political ladder, he’ll find that the level of scrutiny increases the further up he goes.

He’s also more likely to be subject to cheap tricks like having his Wikipedia page edited, as was the case on Tuesday evening when his title as Minister was given a more sinister meaning… 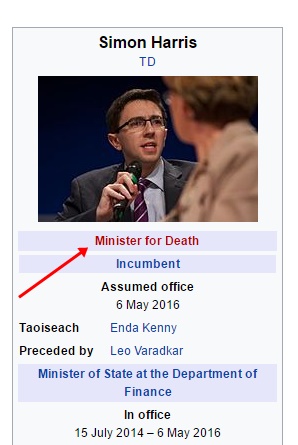 We’re sure everything will return to normal before long, of course; between WhatsApp and Wikipedia, poor Simon has had a lot to put up with this week.