Pic: Photographer known only as ‘Villager Jim’ snaps the most penis-shaped cloud you’ll ever see in the UK skies

Clouds don’t come much more penis-shaped than this…

Meteorologists might know better, but as far as we know the odd cloud formations that sometimes appear in the skies overhead are purely coincidental and aren’t meant to be sending some sort of message to passers-by below.

It’s hard to believe that logic when clouds take on a form that is almost certainly penis-shaped, as has happened in Ireland in the past and as absolutely unmistakeably happened above the town of Foolow in Derbyshire yesterday. If unlucky in love residents of Foolow didn’t get lucky this week with a sign like this, then they probably never will… 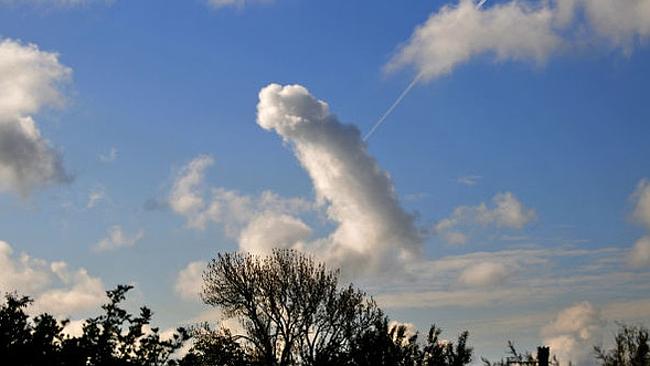 END_OF_DOCUMENT_TOKEN_TO_BE_REPLACED

The picture above was taken by a local wildlife photographer known only as ‘Villager Jim’ and as you can see, it leaves precious little to the imagination. That particular cloud was in an amorous mood, that’s for sure.

"I couldn't believe it when I saw it over my house,” ‘Villager Jim’ told the Western Daily Press.

“It’s not usually the sort of thing I would take a picture of but I'm not going to miss out on a huge c**k flying overhead." Damn right.

Has anyone ever seen a cloud so unmistakeably penis-shaped as this one before? If they have, then we can safely say we’ll be stumped.

popular
One of Keanu Reeves' best movies has just been added to Netflix
A terrific crime thriller is among the movies on TV tonight
Daniel Craig's best pre-James Bond film is among the movies on TV tonight
The JOE Movie Quiz: Week 131
QUIZ: Can you get full marks in this General Knowledge Quiz?
QUIZ: Do you reckon you can get 15/15 in this General Knowledge Quiz
The 50 most iconic songs of all time* have been revealed
You may also like
4 days ago
Mandatory Covid vaccination within the EU needs to be discussed, says Von der Leyen
4 days ago
Several people injured in Germany after old aircraft bomb explodes
5 days ago
All confirmed Omicron cases in the EU so far asymptomatic or mild, says ECDC
5 days ago
Barbados cuts ties with UK and becomes a republic
6 days ago
Twitter CEO Jack Dorsey officially resigns from the company
1 week ago
Omicron variant symptoms are "mild" so far, says doctor who discovered it
Next Page