PIC: The Times have officially apologised for not mentioning Hillsborough on its front page

There was a glaring omission from the major newspaper.

While the vast majority of media outlets led with the unlawful killing of the 96 victims from the 1989 Hillsborough disaster verdict on Wednesday morning, two major newspapers decided to omit the historic decision from its front page headlines.

As well as The Sun, The Times left out the Hillsborough coverage from their front page headline, instead going with this... 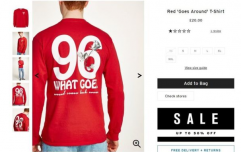 END_OF_DOCUMENT_TOKEN_TO_BE_REPLACED

After receiving a lot of criticism for the decision, The Times have officially released a statement apologising for and explaining the move.

The publication has acknowledged that, although they have covered the news extensively in various forms on Wednesday, they made an error in omitting the story from the front page of their first edition.

Here is the brief statement in full.

We've been criticised today for not having Hillsborough on our first edition front page. This is our response: pic.twitter.com/GNhBN6g3S1

popular
Body of a man discovered in the water off the coast of Donegal
QUIZ: You'll do well to get 100% in this General Knowledge Quiz
QUIZ: How well do you really know Irish weather?
25 years ago, Sylvester Stallone delivered his best performance in a hard-hitting crime drama
The new Garda uniform has finally hit the streets
Body of woman in her 70s found in unexplained circumstances in Kerry
The JOE Friday Pub Quiz: Week 307
You may also like
6 years ago
Man who wore t-shirt mocking Hillsborough victims is fined and claims to have 'lost everything'
6 years ago
PIC: Man arrested after wearing deeply offensive t-shirt mocking Hillsborough tragedy
6 years ago
VIDEO: Hillsborough survivor meets the man who saved his life after 27 years
6 years ago
Eamonn Holmes offers clarification on comments linking West Ham bus attack to Hillsborough
6 years ago
Eamonn Holmes criticised after referencing Hillsborough in comments on West Ham bus attack
6 years ago
The incredibly powerful Hillsborough documentary has moved a lot of people
Next Page