Pic: ‘Tough guy' amputates own leg with a saw and a fruit knife to avoid hospital fees

You think you’re hard? You have nothing on this fella.

First things first kids, if you do have a horribly leg condition, do not, we repeat, do not do what this Chinese man did. Go to hospital.

Zheng Yanliang didn’t fancy paying the fees to have his severely wounded leg tending to by the pros, so the 47-year old decided to hack off his right leg himself, with a saw, a fruit knife and a back scratcher wrapped in a towel to bite down on.

END_OF_DOCUMENT_TOKEN_TO_BE_REPLACED

A report in the London Independent today tells us that Zheng was diagnosed with chronic arterial thrombosis in both legs and painkillers were not doing anything to ease the brutal pain.

The doctors told him that the leg was infected and he would be dead in a month if he didn’t get it sorted. Rather than pay the high medical bill for an amputation, Zheng sorted it himself, in the most gruesome way possible. 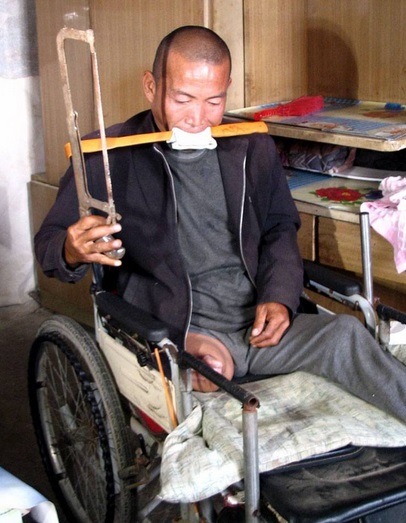 The paper carries quotes from The Shanghaist newspaper version of the story.

END_OF_DOCUMENT_TOKEN_TO_BE_REPLACED

“Over 20 minutes later, when [his wife] returned to the eastern bedroom after awaking from a nightmare, she was dumbstruck by the scene.

“Her husband’s right leg had been sawed off about 15 centimeters from the hip, and the metal saw used for the amputation had snapped into two from the excessive force, and on the table were four molars that had been bitten off. Fortunately, because of the thrombosis, there wasn’t much blood during the amputation.”

Zheng apparently has a reputation as a ‘hard man’ in his village in the province of Hebei and we think it is pretty well justified.

But the ‘surgery’ isn’t the end of it, as Zheng now needs a similar procedure on the other leg. However, the publicity surrounding his case means his unfortunate second amputation should take place in a hospital, rather than his bedroom.