Lionel Messi has a bit of time off what with being injured and all, so he's taken to cleaning his very well-stocked trophy cabinet

What do you do when you're the best footballer in the world but you can't play football because you're injured? Why you clean out the staggering number of trophies that you have collected throughout your career to date. 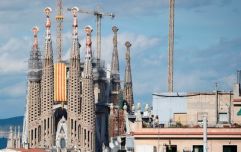 END_OF_DOCUMENT_TOKEN_TO_BE_REPLACED

As his brother, Matias, was quick to point out, he's missing one of his golden boots, so they're not all in there, but it's still a decent haul.

We're still waiting to see if Cristiano Ronaldo favourites this tweet, but nothing on that front yet anyway.

The Big Reviewski || JOE · TBR Spotlight: Loki - Episode Two - 'The Variant'
popular
The JOE Friday Pub Quiz: Week 248
QUIZ: Can you name all these European countries from a list of cities?
QUIZ: Can you get full marks in this potentially very frustrating general knowledge quiz?
Matt Damon planning return trip to Ireland to travel around the country
Three men arrested after reportedly attacking staff of premises on South William Street
The 50 most iconic songs of all time* have been revealed
The JOE Music Quiz: Week 62
You may also like
2 years ago
COMPETITION: Design a One4all Gift Card & win a trip to Barcelona
2 years ago
Train carrying 150 people in Barcelona derails, killing one and injuring six
2 years ago
Trains in Barcelona's main station evacuated following reports of a "luggage bomb"
2 years ago
WATCH: Ryanair passengers in Barcelona escape on emergency chute after a phone caught fire just before takeoff
2 years ago
WATCH: Lionel Messi really enjoys making his dog look silly
3 years ago
QUIZ: Name the players who have played for both Chelsea and Barcelona
Next Page