PODCAST: How to get the hell out of Ireland by selling crisps, biscuits and seafood

The Capital B episode 4 has arrived!

Leave the wind and rain and unseasonal frost behind and get a slice of global pie with this week's The Capital B.

Presented by renowned journalist and author Nick Webb, The Capital B brings you business savvy with  JOE founder Niall McGarry and Róisín Hogan, the Irish woman who very nearly became Alan Sugar's business partner on the The Apprentice.

This week the panel talks about the unlikely combination of Vaseline and Hoovers and gets sucked into the nitty gritty of expanding out beyond our Emerald Isle.

Tom Keogh drops in to talk about his eureka moment of selling potatoes to the USA and we surprise him with a taste test to see if he can live up to his big talk of being able to identify every crisp brand on the Irish market blindfolded.

The biscuit mogul and former Fig Roll queen, Alison Cowzer, reveals the most popular biscuit in Ireland and the billion euro industry of chocolate digestives.

Listen here or subscribe on iTunes and check out the line-up for The Capital B below...

5.00- Tom Keogh arrives with some sexy descriptions of salt and chorizo. 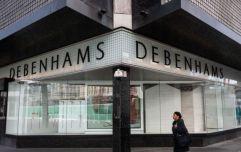 END_OF_DOCUMENT_TOKEN_TO_BE_REPLACED

26.28- The King of Connemara, Richard King, on the perceived royalty of Ireland's seafood industry.

37.20- Alison Cowzer arrives and pointblank refuses to give away the secret of the Fig Roll.


popular
QUIZ: Can you guess these European countries from their outlines?
QUIZ: How well do you know your chocolate bars?
Six more people have died due to Covid-19 in Ireland, 23 new cases
77% of Thursday's Covid-19 cases in Ireland under the age of 25
Phoenix Park to reopen all perimeter gates to traffic
26 pubs facing prosecution for public health and licensing breaches
OFFICIAL: Here are the first pics and hilarious trailer for The Young Offenders Series 3
You may also like
2 weeks ago
Half of restaurants in Ireland will close without emergency aid package, restaurants association warns
3 weeks ago
Freshly-brewed Guinness to be delivered to over 10,000 pubs in Ireland in the coming weeks
1 month ago
Revolut launches Revolut Junior to tailor for 7-17 year olds
2 months ago
How Covid-19 will change the way we hire
2 months ago
Doireann Garrihy and Greg O'Shea team up in campaign paying tribute to Irish dairy farmers
3 months ago
New initiative allows Irish coffee drinkers to buy online and support their favourite coffee shop
Next Page