Officers in the town of Gresham came across a goat stuck on a roof on one of their routine patrols, and as they were approaching and attempting a rescue, local residents chimed in to let them know that they were dicing with death. Or at least a sore leg.

The goat is rumoured to be in movie talks to play a tough-talking, rule-breaking small town sheriff, who's had enough of the system and doing things “by the book”. 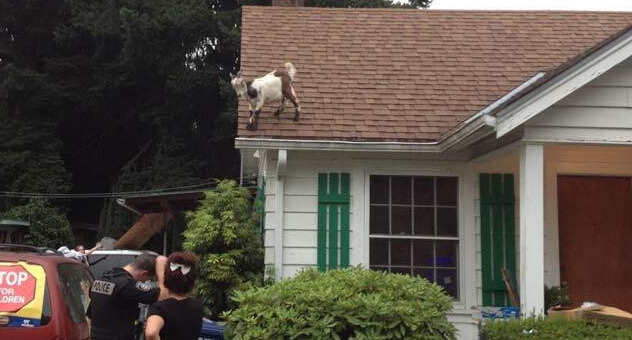 END_OF_DOCUMENT_TOKEN_TO_BE_REPLACED

The situation came to a happy end after the owner, who has earned the goat's respect through years of feeding him tins and milking him (That's how you earn a goat's respect, right?), came home and sorted the situation out.

The police did make a valiant effort to get him down at first though, and we presume they turned to him and said “goat on punk, make my day”.

This isn't the first goat with anger issues that we've seen, as this goat in Brazil also had a pretty short fuse. Someone must have really gotten on his goat...