President Trump has been impeached by the House of Representatives

Trump becomes the third US president to be impeached.

Donald Trump has become the third US president in history to be impeached by the House of Representatives, setting up a trial in the Senate that will decide whether he remains in office.

Nearly all Democrats voted for the charges and every Republican against.

The House first voted to approve the first article of impeachment charging Trump with abuse of power for conditioning military aid and a White House meeting on Ukraine’s announcing investigations into Democrats ahead of the 2020 presidential election.

The second article of impeachment Trump faced was in relation to him being charged with obstructing Congress for refusing to cooperate with the inquiry and ordering other officials not to appear.

Being impeached places Donald Trump alongside only two other presidents in the nation's history - Andrew Johnson and Bill Clinton.

Trump now faces a trial in the Senate, where he is expected to be acquitted because the Republicans control the majority.

As voting took place in the House, Trump was addressing a campaign rally in Battle Creek, Michigan.

"It doesn’t really feel like we’re being impeached. This lawless partisan impeachment is a political suicide march for the Democrat party," Trump said, to cheers from the crowd. 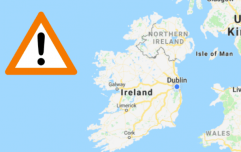 END_OF_DOCUMENT_TOKEN_TO_BE_REPLACED

The House speaker, Nancy Pelosi, described the proceedings as a sad day for the United States and said: "The president’s reckless activities necessitated us having to introduce articles of impeachment" before going on to thank the House committee leaders who headed the impeachment inquiry.

A trial will take place in the Senate in the new year, most likely January.

McConnell is due to address the Senate on Thursday.

No one is above the law, Mr. President. #DefendOurDemocracy pic.twitter.com/59FND6JZWg


popular
Ridley Scott's new film starring Ben Affleck and Matt Damon is looking for hundreds of extras in Ireland
Over 200,000 people have signed petition demanding change in how media treats those in the public eye
BBC will show an 'immensely powerful' documentary about The Troubles tonight
A man has died following an incident at a Dublin shooting range
QUIZ: Can you get full marks in our Top Boy quiz?
THE JOE Movie Quiz: Week 41
QUIZ: How well do you know The Wedding Singer?
You may also like
1 day ago
Met Éireann extends status orange wind warning to 11 counties due to Storm Dennis
2 days ago
Met Éireann issues status orange wind warning for two counties as Storm Dennis arrives
2 days ago
Met Éireann warn of wet and windy weather with severe gusts as Storm Dennis arrives
1 week ago
Someone in Ireland is €500,000 richer after tonight's Euromillions draw
1 week ago
Met Éireann issues status orange wind warning for three counties
1 week ago
Met Éireann issues two status yellow weather warnings for the entire country
Next Page