"Tell your friends to come down, we’re not moving anytime soon," says one protester through a speaker.

A protest in support of a group of activists arrested during the repossession of a house on North Frederick Street on Tuesday night is currently going on on Dublin's O'Connell Street in an attempt to halt rush hour traffic.

Take Back The City (TBTC) – a network of grassroots groups focused on combatting Dublin's housing crisis – claim that they are standing in solidarity with those who were removed from the premises and injured in the process.

END_OF_DOCUMENT_TOKEN_TO_BE_REPLACED

They claim that four people of the six arrested were presented to hospital with injuries including deep wounds, cuts and shoulder pain. They also claim that one activist was thrown down a staircase.

They have since condemned the actions of the Gardaí and those involved.

The operation was carried out by private security employees, three members of An Garda Síochána and a Garda Riot Squad with a Public Order Unit Garda Transit Connect van and one Garda Jeep with dogs.

About 500 protesters marched from North Frederick Street to the junction of Parnell Street and O'Connell Street this afternoon, shortly after 5pm, with the intention of blocking traffic. 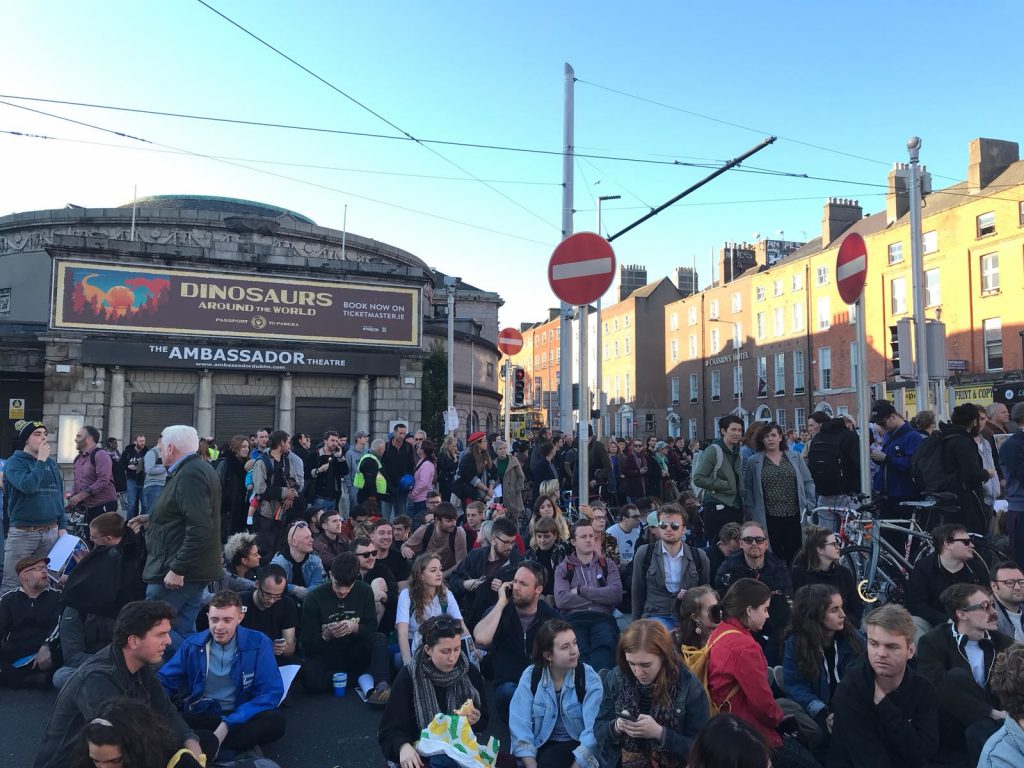 A number of politicians have also expressed concern about the role of Gardaí in the eviction of protesters from the house in North Frederick Street last night.

END_OF_DOCUMENT_TOKEN_TO_BE_REPLACED

The men who evicted the protesters wore balaclavas to cover their faces and were armed with electric saws and power tools with plans to forcibly enter the building.

The Garda Press Office said members of the public order unit were wearing fire retardant face masks, something which they say is part of their uniform.

Speaking to JOE, Eoin from TBTC told us, in his own words, exactly what happened.

"Between 6.30om and 7pm on Tuesday night, between 15 and 20 men in balaclavas in an unmarked van – with no tax or insurance and a UK registration number at its rear – arrived outside 34 North Frederick Street armed with electric saws and power tools to break down the door.

"None of them had any identification on them. This is something that we're keen to get across due to the fact that security guards of all types are legally required to wear identity badges at all times while working."

The TBTC spokesperson is referring to the Private Security (Identity Badge) Regulations 2009, which makes it mandatory for all licensed bouncers and security employees to wear one of two types of identity badges while on duty.

These regulations were set out by the Private Security Authority (PSA), the statutory body with responsibility for licensing and regulating the private security sector in Ireland.

They have since released a statement claiming that only five people were arrested and that a "peaceful" eviction took place – something else TBTC has vehemently denied.

According to Dublin Central Housing Action (DCHA), 34 Frederick Street North had stood empty for about three years prior to the occupation.

In the documents submitted to court, the property owner stated that he intends to develop it as a guest house – joining the 79 other hotels under development in the city centre this summer.

The owner of the property secured a High Court injunction two weeks ago ordering the protesters to leave the building the following day, but they did not.

At time of writing, activists have taken over O'Connell Street in an attempt to stop traffic and make their voices heard. They aim to march en masse to 34 North Frederick Street this evening.

For those who can't make it, you can check it out on Facebook Live here.

popular
The "eighth best movie ever made" is among the movies on TV tonight
Mia Khalifa claims seaside town is better than Miami
Jennifer Lawrence sparks controversy by saying she was the first woman to lead an action movie
Met Éireann updates weather warning for entire country as temperatures set to fall to -6
QUIZ: JOE’s Big News Of The Day Quiz #27
The start of the superhero takeover of Hollywood is among the movies on TV tonight
One of the best films of all time is among the movies on TV tonight
You may also like
3 days ago
Woman hit by rollercoaster is trapped in own body after finally awaking from coma
3 days ago
Woman arrested in connection with dog attack in Wexford that left child seriously injured
3 days ago
We could be getting snow this Thursday, according to Met Éireann
4 days ago
Ireland sees '100% success rating' with four-day work week trial
4 days ago
Winter warning issued as "severe" week of cold weather in store for Ireland
6 days ago
Temperatures set to drop to freezing this weekend as Christmas predictions emerge
Next Page