Protestors gather outside the home of Minister for Finance Paschal Donohoe

The Minister wasn't at home at the time.

Following similar protests outside the family homes of Ministers Simon Harris and Richard Bruton, protestors turned up outside the home of Minister of Finance Paschal Donohoe on Sunday afternoon. 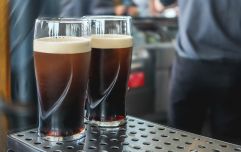 END_OF_DOCUMENT_TOKEN_TO_BE_REPLACED

"Today we’re outside the home of failed finance minister Pascal Donohoe. Pascal has taking the blame for his incompetent friend Simon for the over spending in the children’s hospital, as Pascal has set his sights further a field as he’s no plans to run in the next election. Pascal also see the 1.25 billion profit by AIB as a standard tax we all know this to be bullshit."

However, Donohoe wasn't at home at the time, as he was attending the launch of the Government's new jobs policy in Dublin's CHQ building.

Upon hearing about the small group outside of his home, he promptly left the launch without taking questions from those in attendance.

Speaking to JOE, the Gardaí confirmed that they "attended the scene of a protest outside a house in Drumcondra Dublin 9 today the 10th March 2019 at approximately 1.30pm. Protestors have left the scene peacefully and enquiries will be carried out."

The Big Reviewski || JOE · The Big Reviewski with Dune, a mini-Hangover reunion & the best of Timothée Chalamet
popular
WhatsApp to stop working on 53 phone models, including iPhone 6
Waterford driver fined for speeding, immediately speeds away, is fined again
Three Status Yellow warnings issued as rain set to hammer the country
FREE NOW reports "200 requests a minute" on Sunday following nightclubs reopening
Urgent appeal launched for blood donations as supplies "extremely low"
Paschal Donohoe confronted on the street by anti-vaccine protestors
Nightlife sector asks for two-week grace period on implementing guidelines
You may also like
5 days ago
CONFIRMED: Nightclubs to open at 100% capacity, 11.30pm curfew has been removed
1 week ago
Warning issued after vans follow couriers to steal packages ahead of Christmas
1 week ago
Gardaí investigating after man robs hotel at knife point in Kerry
1 week ago
Man arrested after multiple taxi drivers robbed at knife point in Cork
1 week ago
Micheál Martin says Government "not contemplating going backwards" on Covid-19 restrictions
1 week ago
Giving free contraception to under-17s could cause "legal challenges", Minister says
Next Page