Be on your guard.

Members of the public are advised to be on alert following a series of scam phone calls over the past few days.

The scam in question concerns an automated recording that falsely claims to be an Eir technician looking to repair customer's internet connections. 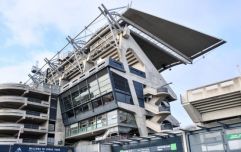 Eir's 5G network now available to 53% of the country

END_OF_DOCUMENT_TOKEN_TO_BE_REPLACED

The recording says that the person's connection is compromised, and prompts them to transfer to an operator in order to fix it.

From there, it appears that people are asked to present personal details or part with a sum of money in order to solve a non-existent issue.

Scam @eir phone calls in the Blackrock and Douglas areas in the last number of days. Just received one myself. Let vulnerable neighbours and relatives know to ignore. pic.twitter.com/gm0rBhhwTe

Communications regulator ComReg notes that there is no method to identity a scam call number, and they can resemble a normal, familiar, geographical or international number that people would come across on a daily basis.

They offer the following advice for the general public:

The Big Reviewski || JOE · The Big Reviewski with Dune, a mini-Hangover reunion & the best of Timothée Chalamet
popular
Alec Baldwin fatally shoots woman with prop gun on movie set
Christy Moore has announced 10 nights at Vicar Street starting next month
Dublin museum voted Europe’s leading visitor experience... again
HBO announces a new Sopranos series is in the works... kind of
QUIZ: Can you name all the countries beginning with L?
CONFIRMED: Nightclubs to open at 100% capacity, 11.30pm curfew has been removed
Here's the lineup for this week's Late Late Show
You may also like
5 months ago
Eir announces 79 towns and villages now have access to faster broadband
11 months ago
Government meets with Eir and Vodafone over "poor customer service"
1 year ago
GoMo announces it has reached 250,000 subscribers
1 year ago
Eir experiencing issues with data and network "in all areas"
1 year ago
TD hits out at Eir over "unlimited" package, calling it "unfair and deceitful"
1 year ago
Eir to charge users of eircom.net email service €5.99 per month from next month
Next Page