Racist chants and graffiti, hate crimes and physical attacks both by and against Donald Trump supporters have been reported since he was elected President on Wednesday.

Some of the most troubling events have taken place at schools and colleges. At Royal Oak Middle School in Michigan, students were filmed chanting "build the wall," referring to Trump's promise to build a wall along the Mexican border, in their school lunchroom.

Superintendent of schools Shawn Lewis-Lakin said that, "because of the strong 'intensity and rhetoric' of the incident," families had come to him expressing concern for the safety of the students.

At Canisius College in Buffalo, New York, a black doll was found hanged in a lift.

This baby doll was found in a freshman elevator last night at Canisius. I don't care who you are or what your beliefs are this is awful pic.twitter.com/oBht011YGR

And at Woodside High School in Redwood City, California, sophomore student Jade Armenio was attacked in the schoolyard after voicing her support for Trump on Instagram.

Armenio was asked if she "hated Mexicans," before being slammed to the ground by another student and told: "You support Trump, you hate Mexicans," according to ABC.

These are just a few of a number of disturbing incidents since Trump was elected in a shock victory over Hillary Clinton on Wednesday.

This graffitied sign reading "MAKE AMERICA WHITE AGAIN," accompanied by a swastika, was discovered in Wellsville, New York, near a local high school.

In New York, a swastika and “MAKE AMERICA WHITE AGAIN” were spray painted on a baseball dugout. https://t.co/mlCumjsugU pic.twitter.com/gLrO0SsZfv

Trump's name was scrawled on the door of the Muslim Student Association's prayer room at New York University fewer than 24 hours after the election. 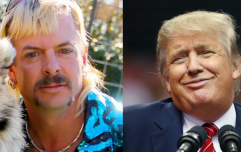 END_OF_DOCUMENT_TOKEN_TO_BE_REPLACED

And a number of Muslim women have reported people trying to rip off their hijabs.

Maha Abdul Gawad said she was shopping in a local Wallmart on Wednesday when another woman pulled off her hijab and said: “This is not allowed anymore, so go hang yourself with it around your neck not on your head," The Independent reports.

This Twitter Moment documents a number of people of colour who claim to have been victims of hate crimes at the hands of Trump supporters since the election.

Meanwhile, white supremacist group the Ku Klux Klan have announced they will hold a "victory parade" in North Carolina in early December.

"Trump's race united my people," says the announcement, according to The Telegraph.

In Chicago, a man was badly beaten by a group of at least five others for being a Trump supporter.

Similarly to after the Brexit vote in Britain, there has been a sharp increase in the number of hate crimes reported in the US since Trump's election.

The Big Reviewski || JOE · TBR Spotlight: Loki - Episode Six - 'For All Time. Always.'
popular
Dublin pub hit with 'about 50 or 60' fake bookings on first day of indoor service
QUIZ: How many of these famous erect landmarks can you recognise?
Met Éireann forecasts "heavy blustery showers" for this week
Only Murders in the Building is a must-watch for fans of true crime podcasts
Jungle Cruise review: The natural successor to The Mummy and Pirates of the Caribbean
QUIZ: Can you get 10/10 in this quick County Cork quiz?
Leo Varadkar confirms Ireland to overtake UK's vaccination rate in "next week or so"
You may also like
4 months ago
Donald Trump is reportedly creating his own social media platform
5 months ago
New footage from Capitol Hill riots shows rioters chanting "Hang Mike Pence"
6 months ago
Donald Trump hints at potential second term as he officially leaves White House
6 months ago
Pardonpalooza: Donald Trump planning 100 pardons on last day of presidency
6 months ago
Joe Exotic has limo waiting as he expects presidential pardon from Donald Trump
6 months ago
Macaulay Culkin calls for Donald Trump cameo to be removed from Home Alone 2
Next Page