This is something you won't want to miss.

Christmas is sadly coming to an end, but it's not all doom and gloom.

Plus, it might be nice to stop eating nothing but leftover turkey and chocolates throughout the day...

But for now, we're still in a festive mode, and the weather reflects that.

According to the Donegal Weather Channel, it will be cold enough over Ireland and the UK for polar stratospheric nacreous clouds to form.

These type of clouds form at an altitude of 15,000–25,000 meters (49,000–82,000 ft) and are are best observed during civil twilight (the period after sunset or before sunrise ending) when the sun is between one and six degrees below the horizon.

Take a look at an example of these types of clouds seen in Norway here: 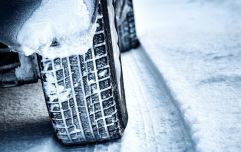 Met Éireann predicting snow this weekend and well into next week

END_OF_DOCUMENT_TOKEN_TO_BE_REPLACED

It is said that these clouds are "very rare" at these latitudes and can only be seen every few years.

Nacreous clouds are made with a mixture of supercooled water, ice crystals and nitric acid. And like we said, they look class.

Here's hoping we get to see some.


popular
Met Éireann predicting snow this weekend and well into next week
The JOE Friday Pub Quiz: Week 179
HBO reveal the first official details of the Friends reunion episode
Here are all the best new titles coming to Netflix in March
A very necessary tribute to Denzel Washington and an underrated masterpiece, Man On Fire
Disney are offering you a dream job based in Dublin
QUIZ: How well do you remember these classic PS2 games?
You may also like
1 day ago
New weather warning issued for three counties
1 day ago
Met Éireann issues status yellow rainfall warning for four counties
3 days ago
Met Éireann issues status yellow rainfall warning for nine counties
4 days ago
Ciara and Dennis have left, but this week's weather is still pretty bad
5 days ago
New Status Yellow weather warning issued for nine counties in Ireland
6 days ago
An updated Status Yellow wind warning has been issued for the entire country
Next Page