"Supervised study" will no longer be an option for those who opt out of religion class.

In a new directive issued by Education Minister Richard Bruton, students who decide to not participate in religion will be offered an alternative class instead.

Previously, those students who did not wish to take the religion classes would usually be left under a study supervisor, but moving forward, Minister Bruton said "The new arrangements will ensure that children who do not want to participate in religious instruction will no longer be sitting at the back of the class or confined to the library." 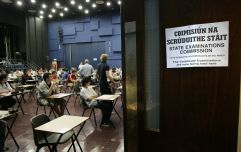 END_OF_DOCUMENT_TOKEN_TO_BE_REPLACED

Minister Bruton continued “It is important that ETB and Community Post Primary schools as multi-denominational schools, fully implement this circular as it presents an important opportunity to meet the expectations of parents and students in a changing society."

"This can only be achieved by consulting with parents, and including their wishes as part of the normal planning process of any school’.

popular
One of the best movies of the decade has just been added to Netflix
20 years ago, one of the best sci-fi movies of the 21st century was a box-office bomb
Surprise frontrunner emerges as potential next James Bond as producers 'love him'
One of the scariest films of all time is among the movies on TV tonight
Katherine Ryan says famous TV star is a ‘predator’ and everyone in industry knows
Katherine Ryan shares harrowing truth about media coverage of ‘famous TV predator’
Very popular US fast food chain planning to open in Ireland
You may also like
4 months ago
You and your family could live on the Aran Islands rent-free for a year
6 months ago
Fine Gael Senator says "toxic masculinity" is stopping female students from studying metalwork and woodwork
7 months ago
Parent group "appalled" by exclusion of "same sex friendships" and contraception from education at Wicklow school
8 months ago
QUIZ: How well do you remember your primary school Irish?
10 months ago
Opposition parties call for Government to consider "Hybrid Leaving Cert"
10 months ago
AA issues warning as schools set to reopen
Next Page