You may want to check to see if you're planned flight is on this list.

We had already received the information on the cancelled flights up to Wednesday 20 September, and these new details run from Monday 25 September to Saturday 28 October.

Cancelled flight details for Thurs 21 September to Sunday 24 September are still to be disclosed. 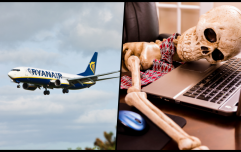 Ryanair is seeking applicants for "the worst job in Ireland"

END_OF_DOCUMENT_TOKEN_TO_BE_REPLACED

The full dates, times and flight numbers of the rest of the cancellations can be found here.

There are multiple flights to and from Ireland to be found on most of the days of cancellations.

Up to 50 flights per day (less than 2% of flights) have been cancelled for the next six weeks. Your flight is operating as usual unless you receive an email.

The reason given for this was so that their work calendar could successfully switch from April-March to January-December, as well as a backlog of crew leave which must be handed out before the end of the year.

However, news of a mass exodus of their pilots to a rival airline that is setting up in Dublin may prove to also be a big factor in the cancellations.

According to The Guardian, Norwegian Air stated that: "We can confirm that 140 pilots have joined Norwegian from Ryanair this year. Pilot recruitment is also under way for more pilots for our new Dublin base opening later this year."

The Big Reviewski || JOE · The Big Reviewski with Dune, a mini-Hangover reunion & the best of Timothée Chalamet
popular
WhatsApp to stop working on 53 phone models, including iPhone 6
Waterford driver fined for speeding, immediately speeds away, is fined again
A recent Oscar Best Picture nominee is among the movies on TV tonight
Urgent appeal launched for blood donations as supplies "extremely low"
Three Status Yellow warnings issued as rain set to hammer the country
FREE NOW reports "200 requests a minute" on Sunday following nightclubs reopening
Paschal Donohoe confronted on the street by anti-vaccine protestors
You may also like
4 weeks ago
Ryanair launching "major" recruitment drive for cabin crew for Dublin base
1 month ago
5,000 new pilot and cabin crew jobs to be created as Ryanair invests €50M in Dublin simulator centre
1 month ago
Air fares set to be "dramatically higher" next year, says Ryanair boss
1 month ago
Ryanair announces flash 'buy one get one half-price' sale
2 months ago
Ryanair launches 24-hour sale on 500,000 seats over 650 routes with prices starting from €12.99
2 months ago
Ryanair warns of "bogus" scam offering "discounted" flights to customers
Next Page