WHO says Covid-19 pandemic is accelerating

Not the news that anybody wants to hear.

As Ireland, and many other EU countries, plough ahead with their reopening strategies, the World Health Organisation has warned that the Covid-19 pandemic is accelerating on a global scale.

The WHO reported that yesterday (18 June) marked the highest number of cases reported in a single day, with an additional 150,000 cases confirmed across the world. 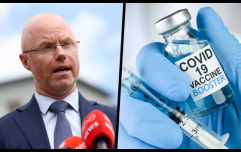 END_OF_DOCUMENT_TOKEN_TO_BE_REPLACED

Speaking at a press briefing today, Director General of the WHO Dr. Tedros Ghebreyesus noted that "almost half of those cases were reported from the Americas, with large numbers also being reported from South Asia & the Middle East."

Ghebreyesus recommended that countries continue to exercise extreme vigilance, saying: "The world is in a new and dangerous phase.

Specifically, the WHO has reminded people to maintain good safety habits, such as:

Ireland is expected to announce a further acceleration of its reopening strategy later on today (19 June). Yesterday, there were 16 new cases of Covid-19 confirmed in the Republic of Ireland.

popular
Jeffrey Dahmer’s dad thinks he knows what’s to blame for son becoming a serial killer
Prince George reportedly told classmate "my father will be King so you better watch out"
Two new 24-hour bus services are coming to Dublin
Budget 2023: Cigarettes going up, energy credits announced, child and social welfare increases confirmed
An underseen disaster film is among the movies on TV tonight
Why Bran Stark is the true villain of Game of Thrones
QUIZ: Test your knowledge with this Ultimate Friends Character Quiz
You may also like
4 days ago
“It’s like insects are crawling all over your body.” Irish people reveal impact of Long Covid
1 month ago
Covid-19 testing centres may be stood down entirely later this year
2 months ago
People who got Covid at Christmas do not have protection from current wave, expert warns
2 months ago
12 Aer Lingus flights cancelled due to spike in Covid cases among staff
3 months ago
Covid hospital cases on the rise as Varadkar says "summer wave" could be starting
4 months ago
Almost 15 million people have died due to pandemic, says World Health Organisation
Next Page