"It's a matter very close to our hearts and whether they say it's about Sean or not, the first thing I think about is Sean being attacked."

The brother of Sean Cox has condemned the Man City players after a video emerged appearing to show the squad singing about Liverpool fans being 'battered in the streets'.

A video emerged on Tuesday which appeared to show City players and staff singing a version of Liverpool's 'Allez, Allez, Allez' song as they travelled on a plane after they won the Premier League on Sunday. 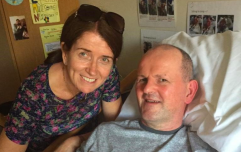 END_OF_DOCUMENT_TOKEN_TO_BE_REPLACED

City fans have sung the song all season.

Manchester City has denied that the "battered in the streets" lyrics refers to Cox, a Meath man and Liverpool supporter who was left with brain injuries after being assaulted outside Anfield last year.

But speaking to talkSPORT, Sean Cox's brother Martin said: "If I'm honest, I'm disgusted. Singing and chanting those words, it's like it gives the impression that it's OK for people to carry out attacks like that on people in the streets.

"It's a matter very close to our hearts and whether they say it's about Sean or not, the first thing I think about is Sean being attacked.

"It wasn't long ago that a Manchester City fan was attacked in Germany, so why they think it's OK to sing songs about people being attacked on the streets when one of their own was attacked not long ago is very naive.

"I think they've tarnished themselves now by coming out with songs like that because at the end of the day they are professional footballers and they've only let themselves down and their club down."

Sean Cox is currently receiving treatment at the National Rehabilitation Hospital in Dún Laoghaire and multiple fundraisers over the last year have raised money for his treatment.

House of Rugby Ireland · Quinn Roux on finding a home in Ireland and Mike McCarthy brings the absolute HEAT!
popular
20 of the best comedies to watch on Netflix right now
The JOE Friday Pub Quiz: Week 227
The 50 most iconic songs of all time* have been revealed
The JOE Movie Quiz: Week 85
QUIZ: The JOE Music Quiz: Week 41
Yewande Biala releases statement discussing racism on Love Island
PICS: The man with the biggest penis in the world has one unbelievable problem with it
You may also like
1 year ago
Jurgen Klopp pays tribute to Sean Cox in touching programme notes
1 year ago
Seán Cox will move to England as he steps up his rehabilitation programme
1 year ago
Congratulations issued to Liverpool on behalf of Seán Cox
1 year ago
'Thank you' - Sean Cox thanks public for their support as he continues his recovery
1 year ago
Sean Cox will leave hospital for the first time to attend a charity match in his honour
1 year ago
Jamie Carragher makes stunning gesture to Liverpool fan Sean Cox
Next Page