Warning: Some readers may find the footage disturbing.

The funeral of slain journalist Shireen Abu Akleh has been marred by violent clashes between Israeli occupation forces and Palestinian citizens attending the memorial service.

On Wednesday (11 May), 51-year-old Akleh was shot dead during a raid by Israeli forces in West Bank. According to Al Jazeera, the outlet that Akleh worked for, she was shot by IDF troops carrying out raids in the city of Jenin, located within the historically contested region, before being rushed to hospital in critical condition. 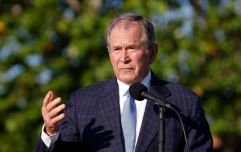 END_OF_DOCUMENT_TOKEN_TO_BE_REPLACED

Al Jazeera journalists and the Palestinian Health Ministry later confirmed that Akleh was declared dead at the hospital shortly after arrival.

According to reports, Akleh was wearing a body armour vest clearly marked 'PRESS' – as is standard safety protocol for those reporting in regions of conflict – when she was caught up in the gunfire.

Ireland's Foreign Ministry quickly condemned the killing, the exact circumstances of which have become the subject of dispute between Israeli and Palestinian authorities, saying that "media freedom and the safety of journalists must be protected".

On Friday (13 May), Akleh's funeral took place in East Jerusalem, leading to shocking scenes as mourners found themselves beaten by Israeli authorities, including those carrying Akleh's coffin through the street.

Warning – the below footage, captured by Al Jazeera and posted online, may be considered disturbing to some readers.

"The Israeli army is asking people if they are Christian or Muslim. If you’re Muslim you weren’t allowed in." - @ajimran

Further footage shared by Times of Gaza shows people attempt to prevent Akleh's coffin from falling to the ground and huddling together to guard her remains as Israeli forces – clad in riot gear and using batons – push them back.

A closer video showing how the coffin carrying Shireen Abu Aqleh’s body fell during the barbaric Israeli attack on her funeral. pic.twitter.com/HHH2zmJ9sj

Israeli police officers have justified their actions, saying that they were pelted by stones and thus were "forced to use riot dispersal means" to control the situation.