Sinn Féin has announced plans to hold a rally in West Belfast at 7pm on Monday evening, following an incident which saw two explosive devices thrown into the homes of Gerry Adams and Bobby Storey on Friday night.

No one was hurt in either attack, but it was also confirmed that Adams' grandchildren had been playing in the driveway just moments before.

It's understood that one of the devices caused damage to a car parked in the driveway.

Footage from Friday night’s attack on the home of Gerry Adams. A rally will be held at Andersonstown Barracks on Monday 16 July at 7pm in solidarity with Gerry Adams & Bobby Storey #NotInOurName pic.twitter.com/UVzjSAjgqh

Sinn Féin leader Mary Lou McDonald is set to be the main speaker at the event. Adams and Storey will also be present, according to the party. 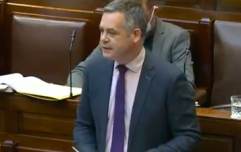 END_OF_DOCUMENT_TOKEN_TO_BE_REPLACED

“Sinn Féin will continue to represent this community and pursue our agenda for change, for peace and for a new agreed and united Ireland,” he said.

“[Tonight's] rally is an opportunity for the people of Belfast to come out to show solidarity with the families of Gerry Adams and Bobby Storey and the people of the Bogside in Derry and send a message to those involved in attacks on Republicans and on the community to stop immediately.”

In an official statement released by Sinn Féin, Policing and Justice Spokesperson Gerry Kelly appealed for calm while condemning the "cowardly" attacks by what he has labelled "increasingly desperate and irrelevant groups."

"These were reprehensible and cowardly attacks on the family homes of Gerry Adams and Bobby Storey," Kelly began.

"Grandchildren were in the driveway of Adams' home minutes before the attack.

“I would appeal for calm. These attacks are the desperate acts of increasingly desperate and irrelevant groups.”

The Big Reviewski || JOE · The Big Reviewski with Dune, a mini-Hangover reunion & the best of Timothée Chalamet
popular
WhatsApp to stop working on 53 phone models, including iPhone 6
Clashes between protestors and private security as tenants removed from Dublin property
Updated Status Orange warning issued for three counties as heavy rain to continue
Alec Baldwin could face criminal charges over fatal film set shooting
Irish hotel named as the scariest place to stay in Europe
Vaccine passes could be needed for hospital visits, Leo Varadkar suggests
An entertaining Heat knock-off is among the movies on TV tonight
You may also like
2 weeks ago
New opinion poll shows Sinn Féin in 10-point lead as most popular party
1 month ago
Simon Coveney survives no-confidence vote as Sinn Féin blasts “culture of cronyism”
1 month ago
Sinn Féin takes 10% lead on Fine Gael amid controversies, according to latest poll
1 month ago
Micheál Martin could be in a bit of bother next week
1 month ago
Mary Lou McDonald: "Very difficult" to see how Simon Coveney stays on as minister
1 month ago
Sinn Féin calls on Taoiseach to state if he has confidence in Simon Coveney amid Zappone controversy
Next Page