In the last few days we've rain warnings and flood warnings, and now we've got the trifecta, thanks to a new snow and ice warning.

According to the Met Office, frequent and heavy hail and snow showers are likely to affect many parts of Northern Ireland from Monday evening, continuing for much of the day on Tuesday. 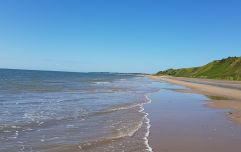 END_OF_DOCUMENT_TOKEN_TO_BE_REPLACED

Travel delays on roads are possible, with a small chance of cancellations to public transport. There is a small chance that power cuts will occur and other services, such as mobile phone coverage, may be affected.

In addition some roads and pavements may become icy, increasing the chance of injuries from slips and falls.

At the time of writing, Met Eireann have not issued a similar warning for the rest of Ireland, but they do forecast that from Monday night, the weather will turn very cold and very windy with showers turning increasingly wintry in western and northwestern counties with gale force westerly winds.

Additionally, showers should be well scattered in eastern areas. Overnight lows of 0 to 2 degrees Celsius with frost anywhere sheltered from the wind.

We will update should any additional weather warnings be issued.

The Big Reviewski || JOE · TBR Spotlight: Loki Episode One - 'Glorious Purpose'
popular
Matt LeBlanc has seen the memes of him as every Irish auld lad and very much enjoyed them
The 50 most iconic songs of all time* have been revealed
The JOE Movie Quiz: Week 106
PICS: The man with the biggest penis in the world has one unbelievable problem with it
People think they've figured out the ranking of the viewers on your Instagram Stories
Novak Djokovic gives the low down on the diet that made him world number one
Tech Corner: Google gambled with the Pixel Buds A-Series, but it paid off
You may also like
13 hours ago
Britain and Ireland travel rules could be tightened over Delta variant concern, says Simon Coveney
14 hours ago
Micheál Martin says extension of Northern Ireland protocol would be "problematic"
16 hours ago
Met Éireann update on "hottest day of the year" as temperatures to reach 26 degrees
4 days ago
259 new cases of Covid-19 reported across Ireland
5 days ago
Met Éireann confirms "tropical airmass" to hit Ireland this week with highs of 23 degrees
5 days ago
271 new cases of Covid-19 reported across Ireland
Next Page