You could soon be seeing the end of the TV3 name

Irish broadcaster TV3 could be set for a rebrand with bosses believed to be considering using the name of the broadcaster's parent company Virgin Media.

According to the Irish Times, Virgin Media Ireland’s chief executive Tony Hanway has confirmed that the group are looking into changing the name of TV3. 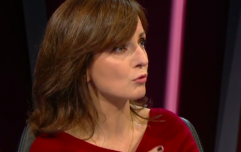 END_OF_DOCUMENT_TOKEN_TO_BE_REPLACED

Virgin media acquired TV3 in November 2015 in a deal which was potentially worth €87 million, and a year later, they took over the struggling UTV Ireland.

TV3 operates three free to air channels – the TV3, 3e and be3 – as well as running a TV3+1 channel and 3player, an on-demand digital video platform.

The broadcaster have launched a number of new shows in the past few months including The Tonight Show with Matt Cooper and Ivan Yates, and a new four part series with David McWilliams.

They're also responsible for the creation of the very popular Irish adaption of the UK show, Gogglebox.

While we're sure you've all turned into Blind Date at some stage over the past few weeks, even if some of you did flick away again shortly after.

popular
More counties issued with weather warnings as Storm Barra hits Ireland
Woman in her 90s dies following road crash in Clare
Schools affected by Storm Barra expected to reopen tomorrow, says Minister
Thousands of homes without power due to Storm Barra
An underseen Keanu Reeves adventure is among the movies on TV tonight
QUIZ: Can you get full marks in this General Knowledge Quiz?
Gardaí warning people not to make unnecessary journeys in anticipation of Storm Barra
You may also like
3 years ago
Virgin Media One (formerly TV3) are launching their own version of Reeling in the Years
3 years ago
David McWilliams' documentary on Ireland on TV this week looks like great viewing
3 years ago
Watching Wednesday night Champions League matches for free in Ireland is a thing of the past
3 years ago
One of the best Irish films in recent years is on television tonight and it stars Evanna Lynch of Harry Potter fame
3 years ago
Podge and Rodge are set to make a return to Irish TV screens
3 years ago
TV3 to air a rugby special all about Ireland's Grand Slam journey this Sunday
Next Page