"This amount of plastic in the stomach is nonetheless horrific."

A sperm whale with 100kg of plastic in its stomach has been found dead off the coast of Scotland.

The subadult whale became stranded on the Isle of Harris in the Outer Hebrides last week, where it later passed away.

In its stomach was 100kg worth of plastic and litter, including nets, bundles of rope, plastic cups, bags, gloves, packing straps and tubing.

The Scottish Marine Animal Stranding Scheme (SMASS) has said that it is likely that the plastic had been there "for some time," but added that they couldn't find any evidence of intestine obstruction.

"All this material was in a huge ball in the stomach and some of it it looked like it had been there for some time," they said on Facebook.

"The animal wasn’t in particularly poor condition, and whilst it is certainly plausible that this amount of debris was a factor in its live stranding, we actually couldn’t find evidence that this had impacted or obstructed the intestines.

"This amount of plastic in the stomach is nonetheless horrific, must have compromised digestion, and serves to demonstrate, yet again, the hazards that marine litter and lost or discarded fishing gear can cause to marine life." 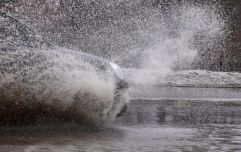 END_OF_DOCUMENT_TOKEN_TO_BE_REPLACED

Upon discovery, SMASS carried out a whale necropsy - the equivalent of an autopsy in humans.

The whale, a male, had been dead for approximately 48 hours by this time leading to an explosion when its body was cut open.

The group pointed to "human activities" as reason for the amount of debris in the mammal's stomach. They are currently  exploring other possible explanations.

"This whale had debris in its stomach which seemed to have originated from both the land and fishing sectors, and could have been swallowed at any point between Norway and the Azores," they said.

"We are looking in more detail to see if we can work out quite why this animal ended up with so much of it in its stomach."