Colm O'Gorman opened proceedings by asking the crowd to silently consider why they were in attendance.

A huge crowd gathered outside the Garden of Remembrance in Dublin on Sunday afternoon to coincide with Pope Francis' public mass at the Phoenix Park.

Taking to the stage, abuse survivor Colm O'Gorman began the Stand4Truth demonstration by asking the audience to think about why they were present and what they brought as individuals.

"We’re here to stand for truth," he told the crowd. 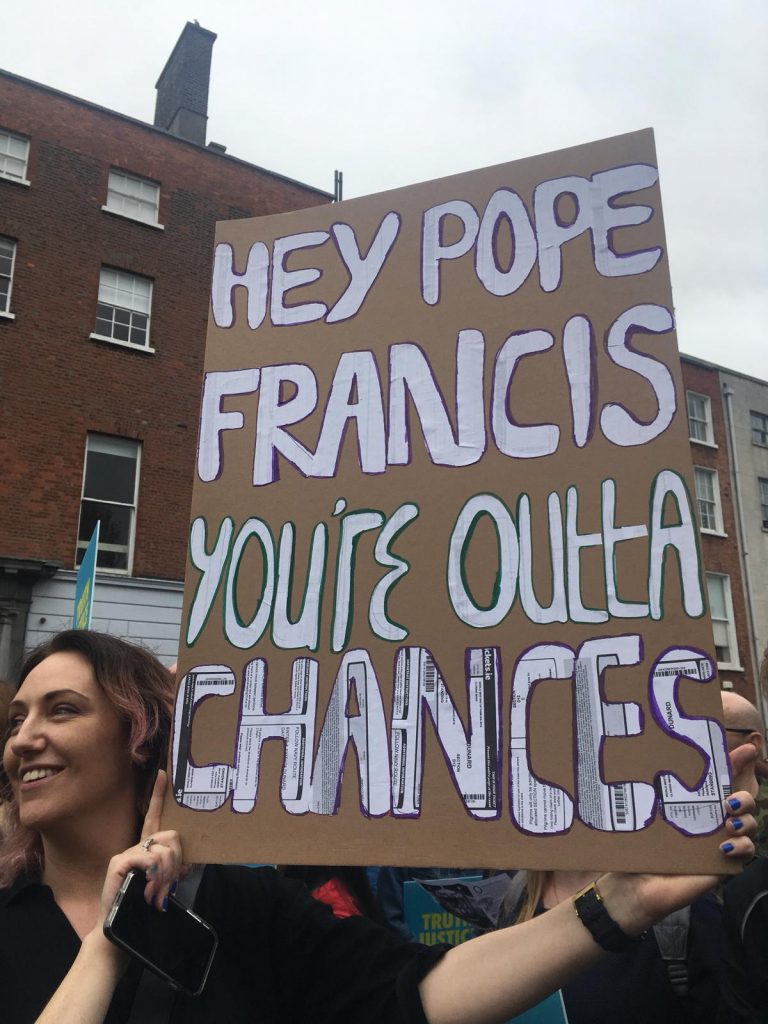 Performances from singers Mary Coughlan and Brian Kennedy followed, with the latter delivering a repurposed version of John Lennon's 'Imagine'.

Elsewhere, author and writer Marian Keyes read a poem - Raymond Carver's 'Late Fragment' to the audience, while Hozier performed a cover of 'I Wish I Knew How It Would Feel to Be Free'.

The Stand4Truth event will conclude at around 5pm following a walk in silence to the final Magdalene Laundry to be closed in Ireland, which was shut in 1996.

A separate demonstration led by historian Catherine Corless took place in Tuam, County Galway at the suspected site of the infant mass grave.

END_OF_DOCUMENT_TOKEN_TO_BE_REPLACED

Corless had previously turned down an official invitation to meet with Pope Francis in Dublin, as she had decided to “stand with the babies.”

She told the Pat Kenny Show on Newstalk that she had asked if a member of the Tuam Home Survivors Network could take her place – considering no members of the support group were invited – but said that the request was refused.

Corless also went on to say that she refused the invitation due to the fact that she believed that her place was at the protest in Tuam on Sunday.

During his public mass in the Phoenix Park, Pope Francis asked for forgiveness for abuses carried out by members of the Catholic Church in Ireland.


popular
Interactive infographic shows real-time spread of coronavirus outbreak
Here's Week 21 of JOE's 19 in 90 quickfire quiz
Emirates is recruiting new cabin crew members in Galway for tax-free jobs
Galway parish reports record high attendance at Ash Wednesday drive-thru
Creed 3 finally happening as a new writer joins the series
QUIZ: The devilishly tricky grammar quiz that will drive you around the bend
Rallies prove that Sinn Féin are playing the game better than anyone else right now
You may also like
1 day ago
Holidaymakers in Tenerife told to 'stay in rooms' as hotel with 1,000 guests on lockdown due to coronavirus
1 day ago
Man stabbed to death in Dublin
2 days ago
Harvey Weinstein found guilty on two counts, first-degree sexual assault and third-degree rape
2 days ago
A fourth person in Italy has died from the coronavirus
2 days ago
A 32-year-old man has died following a traffic collision in Kilkenny
2 days ago
Truck driver jailed following dangerous motorway u-turn
Next Page