Stephen Donnelly has told the Dáil he remains "concerned" about AstraZeneca's ability to deliver vaccine supplies on schedule and at the agreed volumes.

Speaking on Thursday, the Minister for Health said that he has concerns, and that the HSE is "uncertain" over supply issues.

END_OF_DOCUMENT_TOKEN_TO_BE_REPLACED

He said: "The HSE is managing a vaccination programme with uncertain supplies arriving in, particularly from AstraZeneca.

"I certainly remain concerned about AstraZeneca's ability to deliver on schedule, and indeed to deliver at the volumes that have been agreed."

He said that from April, one million doses will be administered per month subject to delivery of contracted supplies.

Head of the Director-General Paul Reid announced this news on Thursday.

The head of the HSE said the vaccination of Cohort 4 - those aged 16-69 with a medical condition that puts them at very high risk of severe disease and death - will begin next week. | Read more: https://t.co/eXUZoEPC4n pic.twitter.com/Buum4cARbL 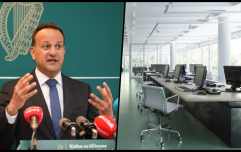 END_OF_DOCUMENT_TOKEN_TO_BE_REPLACED

Earlier in the day, Professor Mary Horgan said that the impact of the vaccination on healthcare workers across Ireland has been "phenomenal" so far.

She said: "It's been phenomenal. We were tracking the number of healthcare workers infected from January into February and essentially it just turned off in February, and likewise the number of hospital admissions."

The Big Reviewski || JOE · The Big Reviewski with Dune, a mini-Hangover reunion & the best of Timothée Chalamet
popular
Vin Diesel walked Paul Walker's daughter down the aisle
The JOE Movie Quiz: Week 125
One of the best thrillers of the decade is among the movies on TV tonight
Report: Crew left Alec Baldwin film set in protest before fatal shooting
The JOE Friday Pub Quiz: Week 266
The JOE Music Quiz: Week 78
Dublin museum voted Europe’s leading visitor experience... again
You may also like
5 days ago
HSE chief Paul Reid: "Time to hit the reset button" as hospitals battle Covid surge
1 week ago
Micheál Martin says Government "not contemplating going backwards" on Covid-19 restrictions
1 week ago
"No doubt" health system heading into difficult winter, says HSE chief
1 week ago
Taoiseach believes people will "be patient" if planned lifting of restrictions doesn't go ahead next week
1 week ago
Deputy CMO advises public to "work from home where possible" this autumn and winter
1 week ago
Not time to "hit the red panic button", says HSE chief Paul Reid
Next Page