This is the first provision of its kind for students.

Leaving Cert students who suffer a bereavement during exams will now be entitled to take three days off from the exams themselves, and then sit alternative papers in July.

This year's Leaving Cert exams are due to start next week. 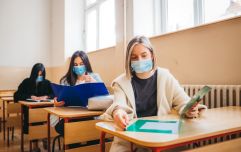 END_OF_DOCUMENT_TOKEN_TO_BE_REPLACED

It is currently being run on a pilot basis, but was initially put into action after student Rhona Butler gave an emotional interview on Ryan Tubridy's radio show earlier this year.

During the interview, Butler told the story of her mother passing away, getting up the following morning for an exam and then sitting three more exams that week before her mother's funeral took place that Saturday.

Minister for Education Joe McHugh made the announcement about the new provisions on Friday, stating: "We have a duty to take reasonable measures to support young people who suffer loss at such an important time for them."

The new provision will allow students to take up three days off from exams, commencing from the death, up to and including the day of the funeral. The three days do not need to be consecutive.

Additionally, the scheme defines a close relative as: a parent or step-parent or legal guardian, or a sibling, or grandparent. It also encompasses the death of a son or daughter or spouse or partner.

House of Rugby Ireland · Quinn Roux on finding a home in Ireland and Mike McCarthy brings the absolute HEAT!
popular
The JOE Movie Quiz: Week 86
Majority of English people 'pleased' or 'not bothered' by prospect of united Ireland
Ireland adores Leitrim hurler Zak Moradi on Tommy Tiernan show
The 50 most iconic songs of all time* have been revealed
PICS: The man with the biggest penis in the world has one unbelievable problem with it
Gardaí uncover functioning shebeen in Swords
The JOE Movie Quiz: Week 85
You may also like
2 weeks ago
Schools to remain closed, though Leaving Cert students will come in three days per week
3 months ago
Some students affected by Leaving Cert grades may need to defer courses, Foley says
3 months ago
6,500 Leaving Cert students received lower grades than they should have
4 months ago
"I feel like my future is in someone else's hands" - Anxious wait for CAO reapplicants
4 months ago
Highest results on record for Leaving Certificate students of 2020
4 months ago
Your guide to the Leaving Cert Results 2020
Next Page