Enda Kenny has responded to the news that Donald Trump has been elected as the 45th President of The United States.

The Taoiseach has released a statement offering “sincere congratulations” to Donald J. Trump.

In the statement, the Taoiseach says Ireland and the United States have enjoyed a very close and warm relationship for many generations and Kenny is "confident that under [Trump’s] leadership, our bilateral relations will continue to prosper." 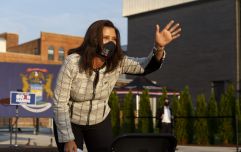 END_OF_DOCUMENT_TOKEN_TO_BE_REPLACED

Kenny did say that we, as a nation, think of Hillary Clinton as a friend to Ireland and he commended her on such a well fought campaign.

Kenny says he looks forward to working with the new administration in the time ahead in the cause of international peace and security.

In the statement, Kenny continues to say that he looks forward to pursuing comprehensive immigration reform, calling it "an issue that is so important to tens of thousands of Irish people who are making a major contribution to America."

popular
The JOE Movie Quiz: Week 80
QUIZ: How well do you know Elf?
QUIZ: Can you guess these European countries from their outlines?
Donald Trump paid $3 million for recount that uncovered more Biden votes
The JOE Movie Quiz: Week 79
Gardaí search suspected shebeen in Kerry
The JOE Music Quiz: Week 35
You may also like
6 days ago
The Obamas are producing a Netflix comedy about the Trump administration
3 weeks ago
Joe Biden predicts he will win election by "clear" margin
3 weeks ago
Trump's spiritual advisor leads group in impassioned prayer service to secure Trump's reelection
3 weeks ago
Donald Trump threatens legal proceedings as Biden edges closer to victory
3 weeks ago
Donald Trump says him losing his lead is "VERY STRANGE"
1 month ago
Donald Trump's Twitter hacked by Dutch researcher for the second time
Next Page