He said he is hopeful religious services may be able to reopen in the coming months.

Taoiseach Micheál Martin has said that the "common good" must prevail over "civil liberties during a pandemic as he gave a hopeful update on reopening religious services.

Speaking at Leader's Questions on Tuesday, he said that he regards religious worship as a "fundamental right in any democratic society". 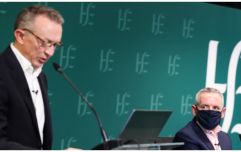 END_OF_DOCUMENT_TOKEN_TO_BE_REPLACED

However, he added that the impact of the pandemic on such liberties has been unprecedented.

Addressing Deputy Martin Kenny he said: "I regard religious worship as a very fundamental right in any democratic society, and I think we should acknowledge that the application of very stringent public health emergency legislation does impose many restrictions on personal liberties and civil liberties.

"We rarely, or in ordinary times, would impose such restrictions on people more generally. But a global pandemic is such a context, and it's the common good that must prevail in a global pandemic."

The politician added that he has met with church groups over the past number of weeks and is hopeful that the government will be able to look at the easing of restrictions on religious services soon.

Some limitations on certain religious ceremonies such as funerals have already been looked at by the cabinet, with 25 people being allowed to attend funeral instead of 10 from 26 April.

The cabinet is set to meet next week to discuss the next phase of easing restrictions across Ireland over the summer.