Journalist Julie Burchill was sacked for a tweet about Meghan Markle and Prince Harry's baby daughter.

Journalist Julie Burchill, who has bought you classic headlines like, 'The sexist left has never liked a right-wing woman' has been axed from UK newspaper The Telegraph following an overtly racist tweet.

Having tweeted a name suggestion about Meghan and Harry's newest arrival, Burchill took to Facebook to make the announcement. 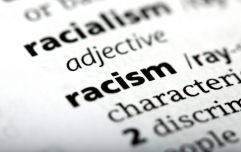 Incidents of hate speech in Ireland almost doubled in 2020

END_OF_DOCUMENT_TOKEN_TO_BE_REPLACED

"I've been sacked by the Telegraph – it's been a lovely five years, and I'll always be grateful to them for ending my wilderness years," she wrote on Facebook.

"However, I'd be lying if I said that I hadn't often moaned to my husband recently about them always rejecting my edgy column ideas and giving me more pedestrian ones – which I've done splendidly anyway."

"Onwards and upwards!" she concluded.

The tweet in question says: "What a missed opportunity! They could have called it Georgina Floydina!"

A lawyer who replied to her tweet with another morally dubious statement was also sacked from her firm on Monday.

The post is obviously a nod to the abhorrent murder of George Floyd last year at the hands of a law enforcement officer in the United States and Burchill's sacking followed substantial criticism of her post on social media.

The Big Reviewski || JOE · The Big Reviewski with Andy Serkis, Squid Game follow-ups & the return of Succession
popular
QUIZ: Can you master this General Knowledge Quiz?
PICS: The man with the biggest penis in the world has one unbelievable problem with it
The 50 most iconic songs of all time* have been revealed
Ryanair is seeking applicants for "the worst job in Ireland"
The 10 best insults from the first two seasons of Succession
The JOE Movie Quiz: Week 124
Gardaí investigating after man robs hotel at knife point in Kerry
You may also like
2 months ago
Eamonn Holmes apologises after ‘racist’ comment to co-star on This Morning
6 months ago
The Falcon and the Winter Soldier is on the precipice of dealing with an incredibly sensitive topic
7 months ago
EA Sports bans Irish FIFA player who racially abused Ian Wright for life
8 months ago
Yewande Biala releases statement discussing racism on Love Island
10 months ago
Former England star Ugo Monye opens up on harrowing experience with racism
1 year ago
Peter Pan and Jungle Book amongst classic Disney films issued with updated racism warning
Next Page