Somebody from The Times might be getting an angry phone call from Buckingham Palace today.

We can’t imagine that any woman would like a completely unrelated picture of themselves to appear above a front-page headline that reads ‘British girls become the fattest in Europe’ in a paper as popular and as well-known as The Times.

Someone's in trouble at @thetimes pic.twitter.com/1AFoYIqgtt 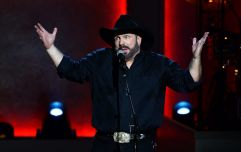 Garth Brooks might be returning to Ireland, and people have a lot to say about it

END_OF_DOCUMENT_TOKEN_TO_BE_REPLACED

We’re not above making mistakes in these pages so we don’t want to go too hard on The Times (people in glass houses and all that) but we imagine that there are a few wrists being slapped in their offices today; we can only hope that it’s the afternoon edition that ends up in Buckingham Palace and that the Queen herself doesn’t get wind of it.

The Big Reviewski || JOE · The Big Reviewski with Dune, a mini-Hangover reunion & the best of Timothée Chalamet
popular
The JOE Movie Quiz: Week 125
Report: Crew left Alec Baldwin film set in protest before fatal shooting
The JOE Friday Pub Quiz: Week 266
This weekend's gig in the 3Arena proved that Ireland is ready to dance again
The JOE Music Quiz: Week 78
Gardaí renew appeal to help identify human remains found on Wexford beach in 1995
Dublin museum voted Europe’s leading visitor experience... again
You may also like
1 day ago
Priest blesses local nightclub in the most Donegal thing imaginable
2 months ago
People have been sharing their “fashion” experiences in Ireland and it’s incredible
2 months ago
The man behind the wildly viral 'Free Luas' campaign says he just "thought it was funny"
2 months ago
Luas reaffirms customers "found travelling without a ticket" will be fined amid 'Free Luas' Twitter campaign
3 months ago
10 of the best memes as Love Island return sends fans into a frenzy on Twitter
4 months ago
Twitter users declare Matt LeBlanc meme "ruined" after Simon Harris joins in with Fine Gael joke
Next Page