There was a lot of anger.

Theresa May spent Friday meeting those affected by the Grenfell Tower fire that has left 30 people dead so far. 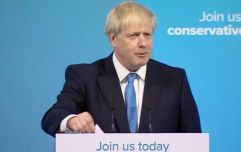 END_OF_DOCUMENT_TOKEN_TO_BE_REPLACED

However, there were angry scenes outside the church in north Kensington as she left. May was bundled into a waiting car by police and a video posted by Channel 4 news shows a woman being held back outside the vehicle. She repeatedly shouts "murderer."

There was very heavy security at the scene, and a media scrum. As the Prime Minister's car drives away, a man shouts: "Why are you running away from us? Answer the people."

You can watch the video here:

.@Theresa_May​ visited North Kensington for the second time on Friday – and left the area amid shouting from a crowd of protesters. pic.twitter.com/awAGx9XOOH

popular
Welder awarded €15,000 for unfair dismissal despite admitting to drinking alcohol before work
Netflix has just quietly added 30 big movies to its library
10 years ago today, the scariest movie ever made (according to science) was released
Amazon Prime Video has just added 37 big movies to its library
Netflix reveals full line-up of new shows and movies arriving in October
It took five long weeks, but The Rings Of Power is finally fantastic
Man in his 40s dies following assault at funeral in Kerry
You may also like
3 years ago
"A very stupid guy" - Donald Trump blasts UK ambassador as emails row continues
3 years ago
Tommie Gorman describes treatment of Theresa May as “tacky” and “vulgar”
3 years ago
May ends in June
3 years ago
House of Commons leader quits government as pressure mounts on Theresa May
3 years ago
Taoiseach confirms new series of political talks to take place following Lyra McKee murder
3 years ago
Brexit has been delayed until Halloween
Next Page