Thousands without power around the country due to Storm Ciara

Several flights have been cancelled due to the adverse weather.

Storm Ciara will be at its strongest around Ireland this morning (Sunday 9 February), with Met Éireann keeping two weather warnings in place for the entire country: a status yellow rainfall warning until 3pm, and a status orange wind warning until midday.

The national weather service have described the rest of the day as follows: 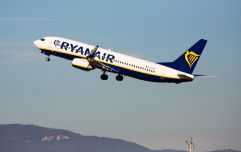 END_OF_DOCUMENT_TOKEN_TO_BE_REPLACED

"Extremely windy or stormy today with heavy thundery rain giving way to sunny spells and frequent squally showers, some of hail and thunder. The winds at their strongest in the morning and early afternoon with some severe and damaging gusts. Some localised flooding also."

However, the storm has already affected thousands of homes around the country, with ESB reporting power outages in Cork, Wexford, Galway and Kerry this morning.

Additionally, the Dublin Fire Brigade reported in the early hours of this morning that they treated a patient with non-life threatening injuries due to a falling tree, and warned people to keep their windows closed, after a seventh story apartment had its window blown off its hinges and into a nearby tree.

During #StormCiara it is wise to keep your windows closed, particularly if you live in a high rise apartment block.

Firefighters from Dun Laoghaire used a hydraulic platform to secure and retrieve a window which was blown off it's hinges on the seventh floor landing in a tree. pic.twitter.com/nHZpwLToX4

Some flights to and from Dublin Airport, Shannon Airport, and Kerry Airport have been cancelled due to high winds.

All passengers travelling today have been advised to check the latest updates on their flights before heading to the airport.

popular
First photos emerge of Boris Johnson drinking at Downing Street party during lockdown
RTÉ's new show is looking for the best takeaway in all of Ireland
EXCLUSIVE: Ewan McGregor and Hayden Christensen on reuniting on the set of Obi-Wan Kenobi
Ryanair steward arrested after being caught on camera drinking during flight
One of 2022's funniest movies has just been added to Netflix
Kurt Zouma charged with three animal welfare offences
You may also like
1 month ago
Ireland's newest regional airline launches big recruitment drive, with staff travel privileges
8 months ago
Aer Lingus announces flight sale as US to lift travel ban for vaccinated EU passengers
8 months ago
Endangered turtle who washed up in Donegal two years ago being flown to Gran Canaria
11 months ago
Aer Lingus introduce new fee to bring carry-on bags onboard flights
11 months ago
All Aer Lingus regional flights operated by Stobart Air have been cancelled with immediate effect
1 year ago
Aer Lingus to permanently close its base at Shannon airport
Next Page