Three donkeys in "severe state of neglect" saved by ISPCA

The donkeys are set to be rehomed by the animal charity.

Warning: Some readers may find images contained in this article upsetting.

The ISPCA has re-emphasised the importance of caring for donkeys following the rescue of three animals in an abandoned field.

Man in his 70s dies following crash in Donegal

END_OF_DOCUMENT_TOKEN_TO_BE_REPLACED

Felix, Fia and Faye were found in a field near Enniscrone along the Sligo/Mayo border with extremely overgrown hooves.

The length of their hooves was a sign of years of neglect, and the animals struggled to walk with the pain and discomfort caused.

The donkeys were rescued by Senior Inspector Kevin McGinley, and are currently recovering in the ISPCA’s National Animal Centre in Longford.

“Sadly these donkeys would have endured countless days, weeks, months and years of extreme discomfort, as a result of negligence by their previous owner," McGinley said.

"They had no quality of life as they been neglected for such a long time.

"They are in ISPCA care now and will receive the desperately needed farrier treatment, which they previously would not have known,” he added. 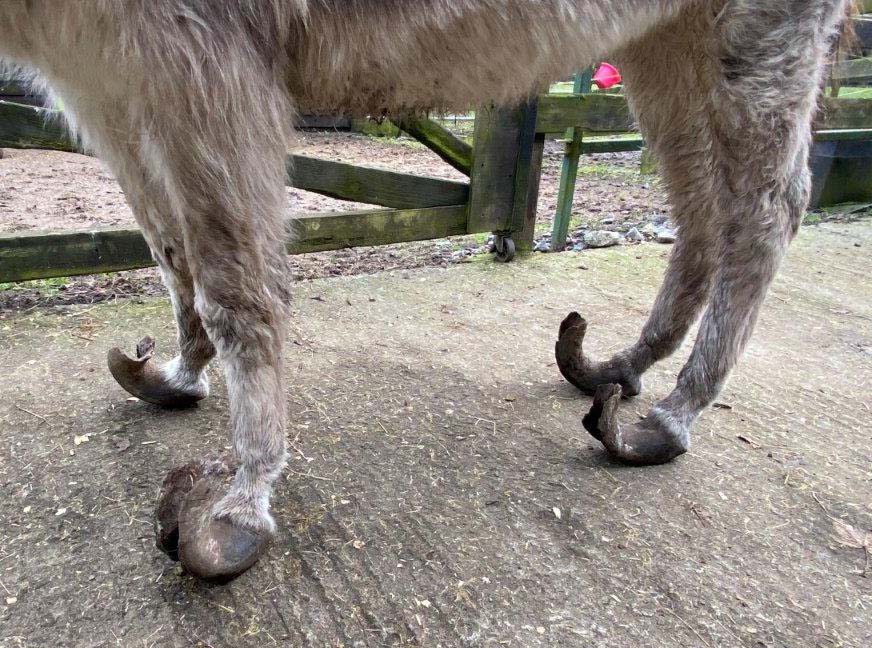 ISPCA Centre Manager, Trish Spargo said: “Our dedicated animal care team have been monitoring the donkeys and we see small signs of improvement in their gait already.

END_OF_DOCUMENT_TOKEN_TO_BE_REPLACED

"It’s really sad that they had to suffer so needlessly and it was distressing to see them in such pain when they first arrived. The level of neglect they would have endured over such a long time was unimaginable and could have so easily been prevented, with basic animal husbandry and routine care.

“Regular hoof trimming by a qualified farrier is recommended every six to eight weeks, which would also identify any hoof problems and correct any issues along with good dietary management.

"The donkeys will remain in ISPCA care along with many other animals until they have fully recovered and we will then go about finding them new homes, where they will be loved and cared for, for the rest of their lives,” Spargo added.

Investigations are continuing but, as the donkeys were not microchipped and registered as legally required, it is difficult to identify those responsible for their neglect and abandonment.

The donkeys were saved thanks in part to a member of the public contacting the Donkey Sanctuary to draw attention to the animals.

If you suspect that an animal is suffering from cruelty, neglect or abuse, the ISPCA encourages you to reach out on 0818 515 515, email helpline@ispca.ie or report online via its website.