WATCH: Times Square shut down after a hot dog stand was infested by a huge swarm of bees

There was a lot of buzz around New York City...

A large section of one of the busiest intersections in the world has been shut down on Tuesday afternoon following a huge infestation of bees.

A hot dog vendor stand was found to suddenly be under the weight of a huge swarm of bees, with no indication as to where the bees arrived from, why they decided to descend upon this hot dog cart, and whether or not many (or any) people had been stung. 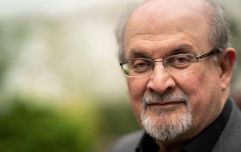 END_OF_DOCUMENT_TOKEN_TO_BE_REPLACED

NBC News report that the exact location of the hot dog stand is above an intersection near the Hard Rock Cafe, at Broadway and West 43rd Street.

Additionally, USA Today reported that eventually a beekeeper did arrive on the scene to relocate the swarm.

Check out the images and videos below:

BEES? BEES. 🐝🐝 This swarm was spotted at a hot dog stand in Times Square on Tuesday. pic.twitter.com/u89uARJLtR

Authorities cordon off section of Times Square to respond to a massive group of bees that are swarming a hot dog stand.

popular
Details of cash payments and Christmas bonus outlined in Sinn Féin’s alternative budget
QUIZ: Test your knowledge with this Ultimate Friends Character Quiz
A brilliant psychological thriller is among the movies on TV tonight
The JOE Friday Pub Quiz: Week 313
House Of The Dragon is already better than Game Of Thrones
One of the best films nobody went to see turns 15 years old this week
Amazon Prime Video has just added 20 very big movies to its library
You may also like
4 months ago
Katie Taylor describes defeating Serrano as the "best moment" of her career
5 months ago
Multiple people shot at New York City subway station
7 months ago
Girl missing for almost three years found alive under staircase in New York
1 year ago
New York state agrees to legalise use of recreational marijuana
2 years ago
The stairs from Joker have become a tourist attraction
2 years ago
The longest non-stop passenger flight has landed in Sydney
Next Page