Topo Chico, the alcoholic drink from Coca Cola, is now on shelves in Ireland

Another hard seltzer is now available to purchase in Ireland.

Earlier this year, Ireland got a little bit too excited when it was announced that White Claw Hard Seltzer was making its way to our shores.

And now that the buzz is starting to die down around that particular alcoholic beverage, we've got another en route. 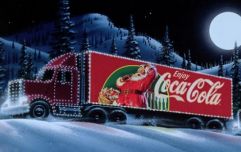 END_OF_DOCUMENT_TOKEN_TO_BE_REPLACED

On top of that, each flavour is gluten-free, has just 96 calories, two grams of sugar, and is 4.7% alcohol by volume.

The new drink is inspired by the 125-year old Topo Chico sparkling mineral water brand, which has long been a popular mixer for bartenders and mixologists in America.

While the drink is currently only available in Tesco stores across the country, it plans to expand to all off-trade outlets in early 2021.

The Big Reviewski || JOE · Cartoon Saloon's Tomm Moore & Ross Stewart on their incredible new film Wolfwalkers
popular
Sale of luxury castle in Kerry, described as "one of Ireland’s best kept secrets”, completed for €4.5 million
Pfizer/BioNTech Covid-19 vaccine to be rolled out in UK next week after government approval
What the hell is 'Stomp and Holler', and why does Spotify insist that you love it?
Weather advisory issued for all of Ireland, with snow on the cards
We're sorry, but a new clip from Wild Mountain Thyme is on the loose
Over 300 Ford cars recalled in Ireland over battery issue that could lead to vehicle fire
The JOE Movie Quiz: Week 80
You may also like
1 month ago
Coca-Cola to bring new Topo Chico Hard Seltzer to Ireland
2 months ago
The top 100 biggest-selling brands in Ireland for 2020 have been revealed
1 year ago
Here's how to get tickets to Coca-Cola's last Premier League roadshow
1 year ago
People of Cork, the Premier League roadshow is coming to town
1 year ago
Get ready Dublin! The Coca-Cola Premier League Roadshow is coming your way
1 year ago
The Coca-Cola Premier League roadshow is coming to Galway this weekend
Next Page