Tributes pour in for tragic loss of young Mayo teacher

There has been widespread outpouring of sympathy following the tragic death of young Mayo school teacher Alan Feeley, with his principal describing him as a ‘fabulous person’.

The 28 year-old teacher taught PE in Scoil na Trionoide Naofa in Doon, Co Limerick, had only played a match for his club Claremorris the day before, and was also a member of Old Crescent rugby club.

He passed away on Tuesday evening after being rushed to University Hospital Limerick after suffering from a brain haemorrhage. 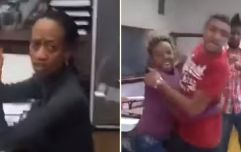 VIDEO: Shocking footage of a teacher getting threatened and bullied by students

END_OF_DOCUMENT_TOKEN_TO_BE_REPLACED

A keen sportsman, Alan was a noted soccer, water polo and rugby player and his death has touched many communities. Many tributes have been pouring in and his school principal Eilis Casey spoke eloquently about the ‘inspirational person’ Alan was.

“He was without doubt an inspirational young man, hardworking, a fabulous teacher and excellent athlete and sportsman,” she said.

“As a teacher he was very innovative and PE was so enjoyable for the girls. He was very popular. There was an ease and calmness about him.”

popular
One of the best action movies of recent years is finally available to watch at home
The JOE Movie Quiz: Week 138
QUIZ: Give this General Knowledge Quiz a whirl
QUIZ: Can you name every Batman actor in three minutes?
Irish employers urged to "take time" when lifting workplace restrictions
The JOE Friday Pub Quiz: Week 278
Lisa Fallon praised as she opens up about terrifying ordeal on Late Late
You may also like
4 years ago
This letter proves sometimes it's okay not to listen to what your teacher said about you
4 years ago
Teacher names student "Most Likely To Become A Terrorist" during end-of-year awards ceremony
6 years ago
PIC: The teacher that drew a penis on her student's homework is keeping her job
6 years ago
VIDEO: Teacher has the most unusual and angry way of dealing with a student sleeping in his class
6 years ago
Video: An Irish teacher and 24 students from Uganda brilliantly singing a huge Bob Dylan song
7 years ago
Video: Korean radio station discussed that anti-Irish teacher email this morning
Next Page